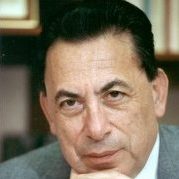 Erich Bloch was confirmed by the Senate to be Director of the National Science Foundation on August 6, 1984. As Director, he is responsible for an agency charged with strengthening the national scientific and engineering research potential and with improving science and engineering education at all levels. The Foundation has an annual budget exceeding $1.7 billion and the annual award of 12,000 to 14,000 grants for research in all fields of natural, social sciences, and engineering.

Before joining NSF, Mr. Bloch was a corporate vice president for Technical Personnel Development at IBM Corporation which he joined in 1952 as an electrical engineer. During his career at IBM, Mr. Bloch was the engineering manager of IBM’s STRETCH supercomputer system in the late 1950’s and early 1960’s. In 1962, he headed development of the Solid Logic Technology program, which provided IBM with microelectronic technology for its System/360 computer. Subsequently, Mr. Bloch was appointed a vice president of the company’s Data Systems Division and general manager of the East Fishkill facility, which is responsible for the development and manufacture of semiconductor components used in IBM’s product line. He was elected an IBM vice president in 1981.

From 1981 to 1984, Mr. Bloch served as chairman of the Semiconductor Research Cooperative, a group of leading computer and electronics firms that fund advanced research in universities and shares in the results, and was the IBM representative on the board of the Semiconductor Industry Association.

He is a member of the National Academy of Engineering and is a Fellow of the American Association for the Advancement of Science and of the Institute of Electrical and Electronics Engineers and a member of its Computer Society. He received his education in electrical engineering at the Federal Polytechnic Institute of Zurich, Switzerland, and a Bachelor of Science degree in electrical engineering from the University of Buffalo in 1952.

Mr. Bloch was awarded the 1990 IEEE Founders Medal “For bold and effective leadership in bringing industry, government, and academia together in new ways to establish and sustain engineering research and education centers across America, and for outstanding contributions to technology, especially in computers, semiconductors, and systems.”