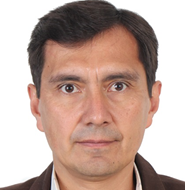 Enrique V. Carrera (SM’07) received his BE degree in electronic engineering (1992) from the Ecuadorian Armed Forces University – ESPE, Ecuador, and his MS degree in electrical engineering (1996) from the Pontifical Catholic University of Rio de Janeiro, Brazil. In 1999, he received his PhD in computer engineering from the Federal University of Rio de Janeiro, Brazil. He was a visiting scholar in 1999 at the University of Rochester, USA. From 2000 to 2004, he was a postdoctoral associate in the Department of Computer Science at Rutgers University, USA. He was also associate professor at University San Francisco of Quito, Ecuador, from 2004 to 2011. Since 2011, he is full professor at the Ecuadorian Armed Forces University — ESPE, Ecuador. Dr. Carrera has participated in approximately 20 founded research projects and has more than 80 publications in recognized journals and conferences. His main research areas are Signal Processing and Computational Intelligence.

Radar target detection is a process that requires the reception, processing and analysis of radio-frequency signals reflected over long distances. This process must comply with several high-performance parameters to guarantee response capacity to threats in the environment. Current systems base their operation on algorithms that have poor performance when operating with a low SNR (signal to noise ratio), a situation that is common when analyzing distant targets in uncontrolled environments. However, the improvement in machine learning algorithms has led to supervised training systems that reflect better results as classifiers. Therefore, this talk presents the problem of radar target detection and classic detection algorithms. After that, comparisons between a classic Bayesian algorithm (AR LMS MEAN) and machine learning algorithms, specifically Random Forest and LSTM Neural Networks (Deep Learning) are presented. The results show that machine learning greatly improves the detection of radar targets for lower levels of SNR.

Machine learning is a powerful tool for solving complex modeling problems in a wide range of applications. The benefits of these techniques are being achieved in implementations everywhere, including predictive maintenance, health monitoring, video surveillance and advanced control systems. However, developing predictive models using machine learning for signals obtained from sensors is not a trivial task. In addition, there is a growing need for developing smart sensor signal processing algorithms, which can be deployed either on edge nodes, embedded devices or even on the cloud. Therefore, this talk presents several signal pre-processing techniques, automatic feature extraction algorithms, and the usage of traditional machine learning algorithms, as well as deep learning algorithms for classifying signals and building predictive models. Results for several case studies are presented, including classification of seismic waveforms, radar target detection, epileptic seizure prediction and disease diagnosis based on images.