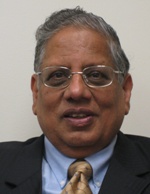 Dharma P. Agrawal has been the Ohio Board of Regents Distinguished Professor of Computer Science, University of Cincinnati, since August 1998. He is coauthor of the textbooks Introduction to Wireless and Mobile Systems and Ad hoc and Sensor Networks and co-edited Encyclopedia on Ad Hoc and Ubiquitous Computing. He is the Fellow of IEEE, ACM, AAAS, and WIF. He is a Golden Core member of the IEEE-CS and recipient of the IEEE Third Millennium Medal. Agrawal has published more than 550 articles, 20 keynote speeches, 27 intensive courses, 5 patents, and 23 invention disclosures, as well as supervised 57 PhD dissertations and led UCBT Bluetooth package.

Agrawal has been on the editorial boards of IEEE Transactions on Computers, Computer, Journal of High Speed Computing, and is serving on JPDC, IJCN, JECE, IJSIA, IJDSN, IJAHUC, IJAHSWN, JDSN, and IJWMC. His research interests include resource allocation and security in wireless mesh and sensor networks and heterogeneous wireless networks.