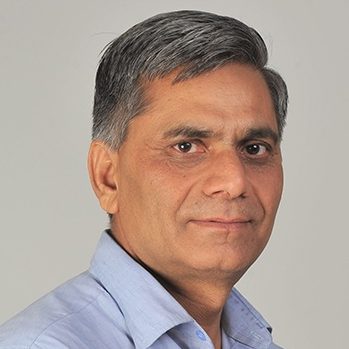 Prof. Dharm Singh Jat received his Master of Engineering and PhD in Computer Science and Engineering from prestigious universities in India. He is a Professor of Computer Science at Namibia University of Science and Technology (NUST). From 1990 to 2014, he was with the College of Technology and Engineering, Maharana Pratap University of Agricultural and Technology—[MPUAT], Udaipur, India. He has guided about 8 PhD and 24 master research scholars.

He is the author of more than 146 peer-reviewed articles and the author or editor of more than 16 books. His interests span the areas of multimedia communications, wireless technologies, mobile communication systems, edge, roof computing, Software Defined Networks, Network security, and Internet of things. He has given several Guest Lecturer/Invited talks at various prestigious conferences.

Prof. Dharm Singh is a Fellow of The Institution of Engineers (I), Computer Society of India and Chartered Engineer (I), Senior Member IEEE and Distinguished ACM Speaker.

He has contributed much to the development of multimedia communication over wired and wireless networks and formed the Special Interest Group on Wireless Networks (SIG-WNs) of Computer Society of India (CSI) and designated first Convener and Chairman, SIG-WNs by CSI. He was Member of International review committee for accreditation and chairing of a number of programs of International Conferences. He also developed an experiment based on simulation software for network experiments, research and project work for undergraduate and postgraduate students.

Nowadays, we are in the middle of a technological transformation, where most of communicating devices in the physical world in all application areas are becoming smarter, more capable and more connected.  Such an Internet of Things (IoT) device promises to improve efficiency in the smart and secure environment (SSE), such as smart cities, smart grids, smart farming, smart factories, military, connected vehicles, healthcare, the environment and creating new opportunities in homes. Most IoT devices are cloud-centric and characterised by device-to-device communication, device-to-cloud communication, and cloud analytics. IoT applications are having challenges in SSE such as poor bandwidth, poor connectivity, latency and not compatible with cloud-centric architectures. This address presents a brief overview of smart computing and communication, functional interoperability for IoT devices, edge computing, QoS support, future research directions and challenges within the context of a local environment such as home, factory, vehicle, office or airport, etc.

Nowadays, the IP video traffic over the wireless network is continuously growing due the advances in wireless network technologies and smart mobile communication devices. It is estimated that globally IP video traffic will be eighty percent of all IP traffic business, as well as a consumer by 2019. It was sixty-seven percent in 2014. In 2019, the global consumer traffic will be reached the range between 80 and 90 percent for all types of videos, i.e., IP video, IP-TV, video on demand (VoD), the Internet, and P2P. In 2014, it accounted that fifty-four percent of IP traffic on wired electronics equipment. However, in 2016, it estimated that the IP network traffic on wireless and mobile equipment may be increased rather than traffic on wired equipment. In 2019, all devices connected to IP networks increased three times the global population. Therefore, for bandwidth hungry applications like IP video, more research needs to be done for reliable video transmission. Clearly, there is an urgent need for new wireless technologies to bridge the gap between present wireless technologies and multimedia applications. This talk will present the innovative idea for cross-layer mechanism for Improving Video Transmissions over wireless network.

Networks today are an inherent part of all defence or military organisations. Any loss of data from defence networks directly impacts the national security. Hence, this data has to be protected using strong encryption techniques. The Advanced Encryption Standard (AES), is a Federal Information Processing Standard (FIPS) for symmetric cryptography since 2001 and is the most popular encryption standard for securing data. However, the AES is known to be prone to brute force attacks and other forms of cryptanalysis. This address presents a conceptual model of a modified AES algorithm, which will make it more complex, less prone to brute force attacks, tweak the algorithm so it is not known to attackers, and introduce a near true randomness to make it stronger and ideal for use in defence networks.