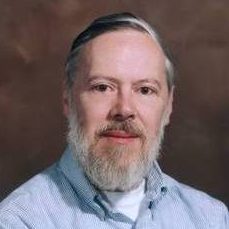 Dennis M. Ritchie is a researcher in the Convergence, Software, and Computer Science Laboratory of Bell Labs / Lucent Technologies in Murray Hill, NJ. Before that, he was in the now-dissolved Computing Sciences Research Center, serving for several years as head of its Systems Sciences Research department.

I was born Sept. 9, 1941 in Bronxville, N.Y., and received Bachelor’s and advanced degrees from Harvard University, where as an undergraduate I concentrated in Physics and as a graduate student in Applied Mathematics. The subject of my 1968 doctoral thesis was subrecursive hierarchies of functions.

I joined Bell Labs in 1967, following my father, Alistair E. Ritchie, who had a long career there. His most visible public accomplishment was as co-author of The Design of Switching Circuits, with W. Keister and S. Washburn; it was an influential book on switching theory and logic design just before the transistor era.

Soon after, I contributed to the Multics project, then a joint effort of Bell Labs, MIT, and General Electric. I helped with a compiler for the BCPL language on the Multics machine (GE 645) and on the GE 635 under the GECOS system. Also, I wrote the compiler for ALTRAN, a language and system for symbolic calculation.

Subsequently, I aided Ken Thompson in creating the Unix operating system. After Unix had become well established in the Bell System and in a number of educational, government and commercial installations, Steve Johnson and I (helped by Ken) transported the operating system to the Interdata 8/32, thus demonstrating its portability, and laying the groundwork for the widespread growth of Unix: the Seventh Edition version from the Bell Labs research group was the basis for commercial Unix System V and also for the Unix BSD distributions from the University of California at Berkeley. The last important technical contribution I made to Unix was the Streams mechanism for interconnecting devices, protocols, and applications.

Early in the development of Unix, I added data types and new syntax to Thompson’s B language, thus producing the new language C. C was the foundation for the portability of Unix, but it has become widely used in other contexts as well; much application and system development for computers of all sizes, from hand-held to supercomputer, uses it. There are unified U.S. and international standards for the language, and it is the basis for Stroustrup’s work on its descendant C++.

Today, as a manager of a small group of researchers, I promote exploration of distributed operating systems, languages, and routing/switching hardware. The recent accomplishments of this group include the Plan 9 operating system, which was released in 1995, and the Inferno operating system, announced April 1996.

Awards include: ACM award for the outstanding paper of 1974 in systems and languages; IEEE Emmanuel Piore Award (1982), Bell Laboratories Fellow (1983); Association for Computing Machinery Turing Award (1983); ACM Software Systems Award (1983); C&C Foundation award of NEC (1989); IEEE Hamming Medal (1990). I was elected to the U. S. National Academy of Engineering in 1988. In April 1999 I received the U. S. National Medal of Technology. These were all awarded in conjunction with Ken Thompson.

Ken’s virtual coat-tails are long. I’m one of the few, besides Bonnie T., who has seen him wear a real coat (and even black tie) on more than one occasion.