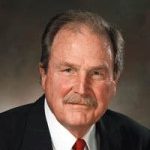 A native of Ohio, David A. Huffman earned his B.S. in electrical engineering from Ohio State University at the age of 18 in 1944. He then served in the U.S. Navy as a radar maintenance officer on a destroyer that helped to clear mines in Japanese and Chinese waters after World War II. He subsequently earned his M.S. degree from Ohio State in 1949 and his Ph.D. from MIT in 1953, also in electrical engineering.

Huffman joined the faculty at MIT in 1953. In 1967, he went to University of California, Santa Cruz as the founding faculty member of the Computer Science Department. He played a major role in the development of the department’s academic programs and the hiring of its faculty, and served as chair from 1970 to 1973. He retired in 1994, but remained active as an emeritus professor, teaching information theory and signal analysis courses.

Huffman made important contributions in many other areas, including information theory and coding, signal designs for radar and communications applications, and design procedures for asynchronous logical circuits. As an outgrowth of his work on the mathematical properties of “zero curvature Gaussian” surfaces, Huffman developed his own techniques for folding paper into unusual sculptured shapes (which gave rise to the field of computational origami).

Huffman’s accomplishments earned him numerous awards and honors. Most recently, he received the 1999 Richard Hamming Medal from the Institute of Electrical and Electronics Engineers (IEEE) in recognition of his exceptional contributions to information sciences. He also received the Louis E. Levy Medal of the Franklin Institute for his doctoral thesis on sequential switching circuits, a Distinguished Alumnus Award from Ohio State University, and the W. Wallace McDowell Award. He was a charter recipient of the Computer Pioneer Award from the IEEE Computer Society, and he received a Golden Jubilee Award for Technological Innovation from the IEEE Information Theory Society in 1998.

Huffman never tried to patent an invention from his work. Instead, he concentrated his efforts on education. In Huffman’s words, “My products are my students.”