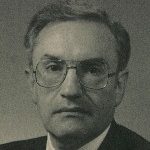 Daniel Leonid Slotnick is a professor of Computer Science at the University of Illinois at Urbana-Champaign, a position he obtained in 1965.  Since 1956 he has also been an independent consultant to numerous domestic and foreign computer-related corporations, as well as to United States Government agencies including NASA and the Department of Defense.  He is active as a foundation director and as a corporate director and has served on seven corporate boards, on three of them as chairman.  His interest in quantitative methods of regional development and resource planning resulted in 1975 in his joint appointment at the University to a professorship in the Department of Landscape Architecture.

Born on November 12, 1931 in New York City, he studied Mathematics at Columbia University, receiving his BA in 1951 and his MS in 1952.  Upon graduation in 1952, he joined the staff of the Electronic Computer Project, headed by John von Neumann, at the Institute for Advanced Study in Princeton, New Jersey.  It was at this seminal project that he learned the rudiments of logic and hardware design and formed his lasting attachment to the computer field.  It was here also that he developed his first thoughts about centrally controlled parallel computers.

In 1954, Dr. Slotnick left Princeton to continue his education, receiving the Ph.D. in applied mathematics in 1956 from what is now called the Courant Institute at New York University.  After a year as a Research Associate at Princeton University, he joined the IBM Development Laboratory in Poughkeepsie, New York.  At IBM he assisted Rex Rice in the design and prototyping of a small general-purpose computer, and discussions with John Cocke led to a joint paper on the use of parallelism in numerical calculations.  Later he served as a designer of a large-scale communication-based data processing system of the stock-brokerage business.

In 1960, Dr. Slotnick was employed by the Westinghouse Electric Corporation in Baltimore, Maryland, where he was given the opportunity to pursue his ideas on parallel computers.  While there, he designed the SOLOMON computer and built the first parallel processor prototypes, first a three-by-three and then a ten-by-ten array.  These arrays both utilized serial-by-bit processing elements, although he also built some 24-bit, byte-oriented processing element prototypes.  In 1962 he applied for the basic patent on centrally controlled parallel processors, receiving it in 1966.

He returned to the academic world in 1965 at the urging of John R. Pasta, then head of the Computer Science Department at Urbana.  Almost immediately, under the sponsorship of the Government Advanced Research Project Agency, and with the close collaboration of Ivan Sutherland and Lawrence G. Roberts, he initiated the ILLIAC IV program and became its director.  Designed at the University of Illinois, manufactured commercially, and installed at NASA, the ILLIAC IV was for eight years, until its shut-down in 1981, the world’s fastest computer, performing at rates reaching three hundred million instructions per second.  The computer was utilized by academic, government, and military Scientifics for wide variety of applications, including meteorology, anti-submarine warfare, and hydrodynamics; but perhaps more importantly, it nucleated the serious study of the relations between computer architecture and numerical algorithms.

Professor Slotnick was awarded the AFIPS Prize in 1962, was the annual Mellon Lecturer at Carnegie-Mellon University in 1965 and was elected an IEEE Fellow in 1976.  He has been a frequent lecturer, has chaired many technical sessions, and has served both as an ACM and an IEEE Distinguished Visitor.

Daniel Slotnick and his wife, Joan, have two grown daughters and live in Urbana, Illinois. 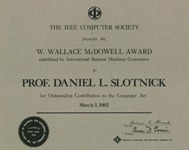