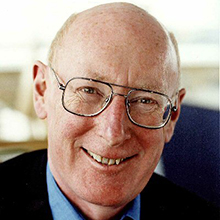 Sir Clive Sinclair is an inventor who was born in London in 1940. He left school at 17 having completed his secondary education at St. George’s College, Weybridge and became a technical journalist for four years.

In 1962, in Islington, London, he founded his own company, Sinclair Radionics. First products included radio and amplifier kits sold by mail-order advertising and, from this base, Sinclair rapidly developed a reputation as a pioneer in the field of consumer electronics – particularly in miniaturisation.

In 1967, when company turnover reached £100,000 and the product range included hi-fi systems, Sinclair moved to Cambridge — so setting a trend for many other high technology companies. Continued expansion took the company to neighbouring St.Ives in 1972.

Later that year, Sinclair launched the ‘Executive’, the world’s first truly pocket calculator – initial selling price a then revolutionary £79 — which was to win numerous design awards and earn over £2.5m in export revenue. Introduction of the ‘Cambridge’ range took Sinclair to the number one position in the UK calculator market.

From 1973, the company invested heavily in R&D for other products, notably digital watches, a pocket television and instruments. As a result, late 1975 saw the introduction of a low cost digital multimeter, the DM2, and the digital wrist watch, the ‘Black Watch’, which used a new chip (integrated circuit) technology – I2L.

In 1976, following 15 years of strong turnover and profit growth, Sinclair Radionics sustained moderate losses due to difficulties with supplies of chips for the Black Watch. Accordingly, additional funding was sought from the then National Enterprise Board (NEB) to support the final stages of the pocket TV project.

Another ‘world first’ for Sinclair, this was launched in January 1977, following a 12-year £0.5m investment programme. A later version of the ‘Microvision’, priced at just £99.95, less than half the price of the first model was introduced in November 1978.

During 1977–78, the company also continued to strengthen its position in both calculator and instrument markets. For the former it introduced the powerful Enterprise Programmable, complete with comprehensive programs library, for around £25, and became, in the latter ‘one of the world’s two largest producers in volume terms’.

In 1979, following a shift of emphasis at the NEB, it was agreed to divide the business. The NEB retained the instrument business and Clive Sinclair resigned all executive responsibilities with Sinclair Radionics in July 1979 to establish a new company, Sinclair Research, in the consumer electronics field.

The new company emerged rapidly as a leader and pioneer in the new personal computer market. Its first product, the Sinclair ZX80, launched in February 1980, was the first computer worldwide to sell for less than £100. It measured just 9″ X 7″ X 2″ (218 X 170 X 50mm) and weighed 12 ounces.

Sir Clive predicted correctly at launch that its availability would expand dramatically the UK and international personal computer market. More than 100,000 were sold eventually — over 60% for export — before production ceased in August 1981.

Complementing the ZX81, 1982 saw the launch of the more advanced colour ZX Spectrum. Designed for a wide variety of home and educational applications, it was to break all previous sales records – and remained a market-leader ten years later.

Subsequent developments in peripherals and interfaces, including the revolutionary ZX Microdrive storage facility — saw the ZX Spectrum become the centre of a complete home system.

The computer range too extended with the January 1984 introduction of the £399 Sinclair QL – then the first computer for home and business applications to use the powerful Motorola 68000 ‘chip’ family as its principal processor.

Sinclair Research, meanwhile was also moving into other consumer electronics markets – notably with the September 1983 launch of the multi-standard flat-screen pocket TV. The result of a six-year £4 million development programme, it sold for just £79.95.

During this period, Sir Clive also entered the publishing field — launching Sinclair Browne in partnership with Patrick Browne in 1981 and, for several years, sponsored the £5000 ‘Sinclair Prize for Fiction’.

Advanced annually to the author of ‘a novel which is not only of great literary merit but also of social and political significance’, it was first awarded in 1983 to Hilda Bernstein for ‘Death is Part of the Process’.

In the same year, Sir Clive was named both as ‘Guardian Young Businessman of the Year’ and as ‘Computing’s Person of the Decade’. In June, he received the major honour of a knighthood in the Queen’s Birthday Honours List.

In 1985, fulfilling a long-term commitment to the development of a range of electric vehicles, Sir Clive launched through his separate Sinclair Vehicles company, the Sinclair C5 electric tricycle.

Although unsuccessful in the UK market, it was warmly welcomed in a number of overseas markets. Models from the original production run now change hands at over twice the launch price.

During 1986, Sinclair Research (SRL) took the decision to divest itself of its computer business — which, inclusive of the then product range and ‘Sinclair’ brand name — was sold to Amstrad plc. The company itself then became a holding company for interests in a series of ‘spin outs’ covering electronics and other sectors.

First among these in 1986 were the Winchester-based Shaye Communications — a leader in the development of new communications products — and Anamartic.

At the same time, Sir Clive also launched a third company, Cambridge Computer Limited, in which SRL initially retained majority control. Cambridge-based, it launched its first product, the best-selling Z88 portable computer in summer 1987 and, during 1989, also entered the then new market for advanced satellite receivers.

Incorporating a revolutionary flat 60cm streamlined ‘dish’, the Cambridge system was one of two to be marketed by Sky Television. Subsequent developments included an ultra-compact 45cm version.

In 1990, SRL completed the ‘spin-out’ of Cambridge Computer by selling the company to SCI and, in 1991, also divested itself of its remaining investment in Shaye.

4.1 ZetaIn February 1992, SRL returned to the electric vehicle market with the preview of Zike, a new electric bicycle. This was followed in 1994 by the introduction of ZETA, a low-cost accessory converting any standard bicycle to an electric one. Priced at just £144.95 (including VAT and delivery), it was described by Sir Clive at launch as “the next major breakthrough in the growing electric bicycle market. ZETA is at once environmentally conscious and extremely practical.

“For the average cyclist, it means more power, more range and less effort — in short, all the fun and freedom without the effort.”

The shoebox-sized ZETA power pack was designed to be: “stylish, compact and easy-to-fit with simple tools in just a few minutes.” It sits over the rear wheel and incorporates a powerful ultra-lightweight motor and sealed rechargeable battery — both major enhancements of Sinclair’s Zike technology. Weighing less than ten pounds, ZETA is controlled by a handlebar-mounted on-off switch. It transmits the drive via a specially designed pulley-mounted belt — a key innovation — which contacts the tyre. ZETA is ideal for any tyre or wheel size (including mountain bikes) and a ZETA converted bicycle may be used either with, or without, pedalling — most typically for assistance. By law its maximum powered speed is 15mph. A ZETA-bicycle may be ridden by anyone aged 14 and over and requires no license, tax, insurance or helmet (although one is recommended). It may go anywhere accessible to a normal bike. Over 15,000 were sold world-wide up to its withdrawal from production in early 1997 in advance of the planned summer introduction of a second generation successor, ZETA-II. In August 2000 ZETA III, ‘hit the road’ as the company’s third generation of highly-effective electric accessories for bicycle assistance. Comprising a single unit – containing motor, battery and charger – it fits over the front wheel and clips on to the handlebar of your bicycle, for simple and easy assembly. The initial fitting has been reduced to less than 30 minutes and afterwards it may be removed — say for safekeeping in the workplace — and then reinstalled in just 10 seconds. ZETA III has a more powerful motor and quieter, more efficient gearbox and boasts a unique patented drive belt system ensures both that it works well in wet weather and that any spray from this area is thrown forward away from the cyclist via an in-built mudguard.

In June 1997, thirty years on from his pioneering success with the smaller-than-a-matchbox Sinclair Micromatic radio, Sir Clive returned to the world of radio with the launch of the Sinclair X1 Button Radio.

Priced at just £9.50 (inc VAT) and — at the size of a ten-pence piece — dubbed the ‘world’s smallest radio’, the Sinclair X1 fitted discreetly in the ear while delivering the full performance of a VHF radio.

This covered the complete 88-108MHz FM frequency range using the same type of autoscan tuning found on car radios costing many times as much — by simply pushing the button it re-tuned to the next station.

In May 1999 Sir Clive added to his range of miniature radios with the Sinclair Z1 Micro AM Radio bringing listeners their favorite AM station — local, national or commercial — when and wherever they are.

Priced at just £9.95 (inc. postage, packing and VAT), the new radio is the size of an acorn and also fits discreetly in the ear while delivering full performance across the AM station (530–1600).

Continuing in the company’s tradition of innovative design, miniaturisation and ultra-low cost, in May 2002, Sinclair Research launched the Wheelchair Drive Unit (WDU).

The WDU was a new ultra-light accessory that provided electrically powered ‘pushing assistance’ for most common domestic types of folding and rigid attendant-propelled wheelchairs.

Sir Clive now lives in London and, apart from electronics, includes mathematics, poetry and music among his interests. He is an active member of the British Mensa Society.