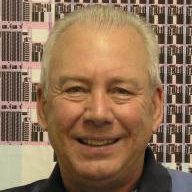 Chuck Seitz is an architect and designer of innovative computing and communication systems, many of which have exploited asynchrony and concurrency to achieve performance at the limits of available technology.  Chuck is also known for creating new disciplines of digital design, and for instilling these approaches in a generation of students and co-workers.  Chuck’s 1992 election to the National Academy of Engineering carried the citation “for pioneering contributions to the design of asynchronous and concurrent computing systems.”

Chuck become fascinated with digital design during the 1960s at M.I.T., where he earned S.B., S.M., and Ph.D. degrees in electrical engineering.  While a graduate student, Chuck taught courses in switching and automata theory, developed M.I.T.’s digital-system project-laboratory course, and received the M.I.T. Goodwin Medal “for conspicuously effective teaching.”  Chuck’s Ph.D. thesis on asynchronous logic helped to expose and explain the fundamental problems of mutual exclusion and of synchronizing asynchronous signals to a free-running clock.

After M.I.T., Chuck moved to Utah to become an assistant professor of computer science at the University of Utah and to work at the newly founded Evans & Sutherland Computer Corporation designing the highest performance graphics engines of the time.  Chuck then moved to California to do research for Burroughs on digital-video techniques of aperture filtering for character and geometric display.

In 1977, Chuck joined the computer science faculty at Caltech, where his research and teaching were in VLSI design and concurrent computing.  Chuck and his students, under DARPA sponsorship, developed the first multicomputer, the Cosmic Cube; devised the key programming and packet-switching techniques for the second-generation multicomputers; and transferred these technologies to industry.  The Intel Paragon, ASCI Red, and Cray T3D/E employ message-passing techniques licensed from Chuck’s Caltech patents.

In 1994, Chuck led a team that founded Myricom, Inc., a company dedicated to making the high-performance interconnect and switching used in multicomputers available as a commercial product.  Myrinet, which was used in thousands of high-performance compute clusters, is a direct descendent of multicomputer message-passing networks.

Chuck resigned as President and CEO of Myricom in August 2010 to concentrate on research and writing.