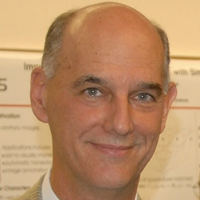 W. Bruce Croft is a Distinguished Professor in the School of Computer Science at the University of Massachusetts Amherst, which he joined in 1979. In 1992, he founded the Center for Intelligent Information Retrieval (CIIR), which combines basic research with technology transfer to a variety of government and industry partners. Dr. Croft was the Chair of Computer Science from 2001-2007.

His research interests are in many areas of information retrieval, including retrieval models, representation, web search, query processing, cross-lingual retrieval, and search architectures. He has published more than 250 articles on these and other subjects, with an h-index of 85 according to Google Scholar. Through the joint Lemur Project with CMU, his group has provided open-source search engines and research tools to many in the academic and industrial IR community.

Dr. Croft was elected a Fellow of ACM in 1997. He has been a member of the National Research Council Computer Science and Telecommunications Board, and Editor-in-Chief of ACM Transactions on Information Systems. He received the Research Award from the American Society for Information Science and Technology in 2000, the Gerard Salton Award from the ACM Special Interest Group in Information Retrieval (SIGIR) in 2003, and the Tony Kent Strix Award in 2013, all of which are career achievement awards.