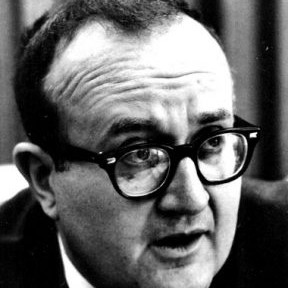 Bob Evans joined IBM in 1951 as a junior engineer in Poughkeepsie, NY, where he took part in the development of IBM’s first large-scale computers. After various assignments in computer development, he was promoted in 1962 to vice president, development, for the Data Systems Division which included overall management responsibility for development of IBM System/360.

In January 1965, he was named president of the Federal Systems Division which develops advanced products for the national interest. In October 1969, Mr. Evans was promoted to president of the Systems Development Division, responsible for the definition, architecture, and systems management of IBM’s principal computer product lines, and was elected an IBM vice president in June 1972. He was appointed president of the System Communications Division in May 1975, responsible for designing, developing and manufacturing of terminal and computer communications related products. He was named to his present post in April 1977, responsible for coordinating the effectiveness of IBM’s worldwide engineering, programming and technology activities.

In addition, since 1974 Mr. Evans has been a member of the Partner’s and Executive Committee of Satellite Business Systems, a partnership involving Aetna, Comsat General and IBM. He is responsible for coordinating IBM’ s involvement in this communications satellite-based company.