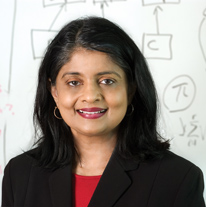 Dr. Bhavani Thuraisingham is the Louis A. Beecherl, Jr. I Distinguished Professor in the Erik Jonsson School of Engineering and Computer Science at the University of Texas at Dallas (UTD) since September 2010. She joined UTD in October 2004 as a Professor of Computer Science and Director of the Cyber Security Research Center which conducts research in data security and privacy, secure networks, secure languages, secure social media, data mining and semantic web. She is an elected Fellow of three prestigious organizations: the IEEE (Institute for Electrical and Electronics Engineers, 2002), the AAAS (American Association for the Advancement of Science, 2003) and the BCS (British Computer Society, 2005). She is the recipient of numerous awards including the 2010 Research Leadership Award for “Outstanding and Sustained Leadership Contributions to the Field of Intelligence and Security Informatics” presented jointly by the IEEE Intelligent and Transportation Systems Society Technical Committee on Intelligence and Security Informatics in Transportation Systems and the IEEE Systems, Man and Cybernetics Society Technical Committee on Homeland Security, and the 2010 ACM SIGSAC (Association for Computing Machinery, Special Interest Group on Security, Audit and Control) Outstanding Contributions Award for “seminal research contributions and leadership in data and applications security for over 25 years”. She is a Distinguished Scientist of ACM, was an IEEE Distinguished Lecturer between 2002 and 2005, and was also featured by Silicon India magazine as one of the seven leading technology innovators of South Asian origin in the USA in 2002.

During her six years at UTD, Dr. Thuraisingham has established and leads a strong research program in Intelligence and Security Informatics which now includes 5 core professors and the team has generated over $12 million in research funding from agencies such as NSF, AFOSR, IARPA, NGA, NASA, ONR, ARO and NIH as well as corporations such as Raytheon Corp. The research projects include an NSF Career Grant, an AFOSR Young Investigator Program Award and a DoD MURI Award on Assured Information Sharing. Her current focus includes three activities: (i) studying how terrorists and hackers function so that effective and improved solutions can be provided, (ii) initiating interdisciplinary programs integrating social sciences and information sciences and (iii) transferring the technologies developed at the university to commercial development efforts. She is also instrumental in establishing UTD’s undergraduate certificate program as well as the MS Track in Information Assurance and is a Co-PI of the $1.8 million NSF Scholarship for Service Award in Cyber Security. She teaches courses in data and applications security, trustworthy semantic services and digital forensics and collaborates with DFW corporations as well as the North Texas Regional Computer Forensics Laboratory for student projects.

Prior to joining UTD, Dr. Thuraisingham was an IPA (Intergovernmental Personnel Act) at the National Science Foundation (NSF) in Arlington, VA, from the MITRE Corporation for three years. At NSF, she established the Data and Applications Security Program and co-founded the Cyber Trust theme and was involved in interagency activities in data mining for counter-terrorism. She worked at MITRE in Bedford, MA between January 1989 and September 2001, first in the Information Security Center and later as a department head in Data and Information Management as well as Chief Scientist in Data Management in the Intelligence and Air Force centers. At MITRE, she led team research and development efforts on secure data management and real-time data management for NSA, AFRL, SPAWAR, CECOM and CIA. She also served as a technical consultant in information security and data management to the Department of Defense and the Intelligence Community for over 10 years and established research programs in data security and data mining. She has continued to serve as an expert consultant to the Department of Treasury since 1999 on software research credit and also advised the Department of Justice in 2001. Thuraisingham’s industry experience includes six years of research and product development as well as technology transfer at Control Data Corp. and Honeywell Inc. in Minneapolis, MN. While in industry and at MITRE, she was an adjunct professor of computer science and member of the graduate faculty, first at the University of Minnesota and later at Boston University between 1984 and 2001. She also worked as visiting professor soon after her PhD, first at the New Mexico Institute of Technology and later at the University of Minnesota between 1980 and 1983.

Dr. Thuraisingham’s research interests are in data security and data mining for counter-terrorism. Her work has resulted in over 100 journal articles, over 200 refereed conference papers and workshops, three US patents and several IP disclosures. She is the author of ten books in data management, data mining and data security including one on data mining for counter-terrorism and another on Database and Applications Security and is completing two more books on Data Mining Tools for Malware Detection and Building and Securing the Cloud. She is also the editor of twelve books. She has given over 90 keynote presentations at various technical conferences and has also given invited talks at the White House Office of Science and Technology Policy and at the United Nations on Data Mining for counter-terrorism. She serves (or has served) on editorial boards of leading research and industry journals including several IEEE and ACM Transactions, the VLDB Journal, and also served as the Editor in Chief of Computer Standards and Interfaces Journal. She has contributed to multiple standards activities including Navy’s Next Generation Interface efforts, Object Management Group’s Real-time Computing and C4I efforts, and more recently the Open Geospatial Consortium’s semantic web efforts. In addition, she has been an instructor at AFCEA’s (Armed Forces Communications and Electronics Association) Professional Development Center since 1998 and has served on panels for the Air Force Scientific Advisory Board and the National Academy of Sciences. She is a member of several professional organizations including the IFIP 11.3 Working Group in Data and Applications Security and AFCEA. She has chaired over ten conferences and has served in over 100 conference program committees.

Dr. Thuraisingham is the founding president of “Bhavani Security Consulting, LLC”, a company providing services in consulting and training in Cyber Security and Information Technology. She is also the founding President and Chief Executive Officer of “Knowledge and Security Analytics, LLC”, a spin-off company from UTD developing tools in malware detection and information sharing.

Dr. Thuraisingham promotes Math and Science to high school students as well as to women and underrepresented minorities, and is a member of the Society of Women Engineers (SWE). She has participated in panels at CRA-W and has given featured addresses at conferences sponsored by WITI (Women in Technology International) and SWE, and received the 2001 Woman of Color Research Leadership Award from Career Communications Inc. She has been involved with IEEE Computer Society activities for over 10 years first serving on the conferences and tutorial board and later on the awards board. She also serves on the ACM Policy Council advising policy issues on privacy and intellectual property and on the ACM-W council promoting women in computing. She is a strong advocate for safeguarding children and has participated in a National Academy panel on protecting children from inappropriate content on the Internet chaired by the Hon. Dick Thornburgh in 2000 and is continuing with these efforts and recently participated in the EastWest Institute’s 1st Worldwide Security Summit panel on protecting our children in cyberspace. She also writes motivational articles including one on CS Careers in the Global Economy. Articles on her efforts and her vision, as well as her team’s research, have appeared in multiple media outlets including the Dallas Morning News, The Boston Globe, ABC News, D Magazine, MITRE Matters, the DFW Metroplex Technology magazine and Raytheon Technology Magazine, as well as press releases published by UTD, MITRE, the United States Air Force, and IBM Research Zurich among others. She has also appeared on DFW television giving her views on cyber security.