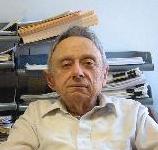 Azriel Rosenfeld is a tenured Professor and Director of the Center for Automation Research, a department-level unit of the College of Computer, Mathematical and Physical Sciences at the University of Maryland in College Park.  He also holds affiliate professorships in the Departments of Computer Science and Psychology and in the College of Engineering. He holds a Ph.D. in mathematics from Columbia University (1957), rabbinic ordination (1952) and a Doctor of Hebrew Literature degree (1955) from Yeshiva University, and honorary Doctor of Technology degrees from Linkoping University, Sweden (1980) and Oulu University, Finland (1994), and is a certified Manufacturing Engineer (1988).

Dr. Rosenfeld is widely regarded as the leading researcher in the world in the field of computer image analysis. Over a period of 30 years he has made many fundamental and pioneering contributions to nearly every area of that field. He wrote the first textbook in the field (1969); was founding editor of its first journal (1972); and was co-chairman of its first international conference (1987). He has published 25 books and over 500 book chapters and journal articles, and has directed over 45 Ph.D. dissertations.

He is a Fellow of the Institute of Electrical and Electronics Engineers (1971), and won its Emanuel Piore Award in 1985; he is a founding Fellow of the American Association for Artificial Intelligence (1990) and of the Association for Computing Machinery (1993); he is a Fellow of the Washington Academy of Sciences (1988), and won its Mathematics and Computer Science Award in 1988; he was a founding Director of the Machine Vision Association of the Society of Manufacturing Engineers (1985-8), and won its President’s Award in 1987; he was a founding member of the IEEE Computer Society’s Technical Committee on Pattern Analysis and Machine Intelligence (1965), served as its Chairman (1985-7), and received the Society’s Meritorious Service Award in. He received an IEEE Standards Medallion in 1990, and the Electronic Imaging International Imager of the Year Award in 1991; he was a founding member of the Governing Board of the International Association for Pattern Recognition (1978-85), served as its President (1980-2), and won its first K.S. Fu Award in 1988; he was a Foreign Member of the Academy of Science of the German Democratic Republic (1988-92), and is a Corresponding Member of the National Academy of Engineering of Mexico (1982).

In 1985 he served as chairman of a panel appointed by the National Research Council to brief the President’s Science Advisor on the subject of computer vision; he has also served (1985-8) as a member of the Vision Committee of the National Research Council. In 1982-3 and 1986-8 he served as a member of a task force appointed by the Defense Science Board to review the state of the art in automatic target recognition.