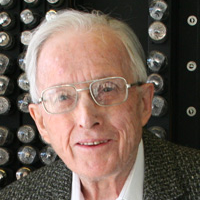 The photo above shows Professor Arthur Burks in front of a portion of the ENIAC that he brought to the University of Michigan in 1964. This part of the original ENIAC is currently displayed in the Computer Science and Engineering Building.

We are saddened by the news that Professor Arthur W. Burks passed away on Wednesday, May 14, 2008 at the age of 92. Professor Burks was an active member of the University of Michigan faculty for 40 years, 1946-1986. He joined the Department of Philosophy in 1946 and founded the Logic of Computers Group in 1949, the first research organization dedicated to computing at the University. He helped start the graduate program in Communication Sciences in 1957 and the Department of Computer and Communication Sciences (CCS) in 1967. He served as the first chair of CCS in 1967-1968. He was the recipient of many awards and honors including the Henry Russell Lectureship in 1978 – one of the highest honors the University of Michigan confers on a senior faculty member. In 1984 he joined EECS as part of the merger of ECE and CCS.

Professor Burks received a BA in Mathematics from DePauw University in 1936 and his PhD from the University of Michigan in 1941. In 1943, as part of the war effort, he was recruited to work with Professor John Mauchly, J. Presper Eckert, and Herman Goldstine as a major designer of what was to become the ENIAC, the first general purpose electronic computer. The ENIAC was completed in 1946 and parts of it are on display in the entrance to the CSE Building due to Burks’ efforts to preserve the early history of computing. Burks also developed an intense collaboration with John von Neumann, co-authoring several scholarly papers and a book with him.

Professor Burks co-authored several books and articles (1981-2003) with his wife, Alice R. Burks that documented in great detail the workings of the ENIAC, the details of the Atanasoff and Berry computer of 1938, and the legal battles that ensued over the patent rights of those who participated in these early computers.

Professor Burks was a pioneer and an outstanding contributor to the reputation of the University of Michigan in the computing field. He is survived by his wife of 65 years, Alice, and three children. Our thoughts and prayers are with Alice and her family. A memorial service was held at a later date.