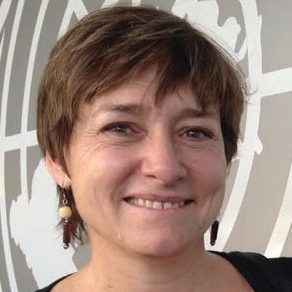 Professor Ann DeMarle is an Associate Dean and director of Champlain College’s Emergent Media Center overseeing the MFA and MS in Emergent Media, the MS in Emergent Media-Shanghai, and the MakerLab. She is the college’s first Roger H. Perry Endowed Chair after designing and directing the college’s most popular degrees: the trio of Game degrees and Multimedia and Graphic Design.  In 2002, she founded the Governor’s Institute of Vermont in Information Technology. A 2006 Apple Distinguished Educator, and a 2008 and 2011 IBM Faculty awardee, she received the 2014 inaugural Champlain College Audeamus Award.

She has been twice elected to the prestigious international Institute of Electrical and Electronics Engineers (IEEE) Computer Society (2009-11, 2013-16). Her 2015 IEEE Computer Society volunteer duties include Audit Committee member, Constitution & Bylaws Committee member, and Ombudsman. She is also a new board member for the IEEE Member and Geographic Activities Board, a trustee for Images and Voices of Hope (ivoh.org), and serves as a member and former trustee for the Vermont Arts Council where she chaired the Education and Executive Committees.

A frequent speaker on games, learning, and emergent media, DeMarle received an MFA from Rochester Institute of Technology. Before entering academia, she had a successful career creating computer graphics solutions for AT&T, Lockheed Martin, General Dynamics, Kodak, Lotus, and IBM.