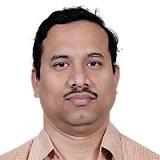 Amlan Chakrabarti is a Full Professor in the A.K.Choudhury School of Information Technology at the University of Calcutta. He is an M.Tech. from the University of Calcutta and did his Doctoral research at Indian Statistical Institute, Kolkata. He was a Post-Doctoral fellow at the School of Engineering, Princeton University, USA during 2011-2012. He is the recipient of the prestigious Department of Science and Technolgy, Govt. of India BOYSCAST fellowship award in Engineering Science (2011), Indian National Science Academy (INSA) Visiting Faculty Fellowship (2014), Japan Society for the Promotion of Science (JSPS) Invitation Research Award (2016), Erasmus Mundus Leaders Award from EU (2017) and Hamied Visiting Professorship from University of Cambridge (2018) and Siksha Ratna Award by Dept. of Higher Education Govt. of West Bengal (2018). He has also served in various capacities in various higher education organizations both at national and international levels.

He is a Sr. Member of IEEE and ACM, Distinguished Speaker of ACM, Secretary of IEEE CEDA India Chapter, Vice President of Data Science Society and Life Member of CSI India.

Rapid developments in hardware, software, and communication technologies have accelerated the inroad of Internet-connected sensory devices commonly known as the Internet-of-Things (IoTs) that provide observations and data measurements from the physical world. By 2025, it is estimated that the total number of Internet-connected devices being used will be amounting to 50 billion. As these numbers grow and technologies become more mature, the IoT generates big data with a variety of multiple modalities and varying data quality. Intelligent processing and analysis of this big data is the key to developing smart IoT applications. This lecture emphasizes the various machine-learning methods that deal with the challenges presented by IoT data by considering some of the applications in the emerging application domains.

Reconfigurable systems are increasingly being employed in a large class of today’s heterogeneous real-time embedded systems, which often demand satisfaction of stringent timeliness constraints. However, executing a set of hard real-time applications on reconfigurable systems such that all timing constraints are satisfied while also allowing efficient resource utilization requires effective scheduling, mapping and admission control strategies. In case of hardware tasks, the reconfigurable space can be considered as partitioned into tiles, which can be mapped to the tasks based on logic requirement and execution deadline. The tradeoff between task throughput, resource and energy requirements can be suitably handled in the run time by considering suitable hardware variants of the tasks that can be mapped through full/partial reconfiguration.
This lecture will brief on the preliminary concepts of embedded task processing on FPGAs using hardware cores and the related architectural design. Scheduling strategies will also be introduced in regards to the efficient mapping of hardware tasks on reconfigurable cores both in full and partial reconfiguration domain. A case study on design and implementation of a high-speed network security processor (NSP) for SSL,TLS protocol implemented on a system on chip (SOC) and a few threat mitigation policies for counteracting Hardware Trojans will be also be discussed.

Quantum Computing exploits the quantum properties inherent to atomic states of matter to perform accelerated computing. This acceleration is achieved through multiple quantum phenomena such as superposition and entanglement thus achieving exponential computational speed up. Entanglement and Teleportation also provides an opportunity to achieve very secured communication processes which are unmatched in the classical computation domain. In order to realize a quantum algorithm in quantum machines, at first we need to design its equivalent quantum circuit. The initial circuit will be decomposed into fundamental quantum operations so that these can be implemented by using various quantum physical machine descriptions (PMDs). The optimized circuit design for quantum cost requires suitable circuit synthesis techniques both for the technology-independent and also for the technology-dependent design phases. Quantum circuit faults and related error coding for quantum circuits also need to be properly addressed depending on the nature of PMD. In order to address all such issues and to generate PMD specific quantum circuits for developing various quantum algorithms, it is well justified to think of a quantum design automation tool (QCAD) that can automate the entire process. The quantum computing machines which provide a high degree of parallelism also give impetus to carry out costly machine learning algorithms and quantum machine learning is gaining much popularity. The teleportation of entangled quantum states provides a full-proof secure data communication infrastructure which can be well utilized in present-day communication links leading towards Quantum Internet.