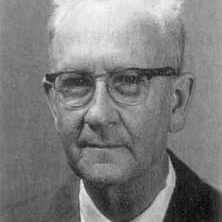 Householder spent his youth in Alabama; getting a BA in philosophy from the Northwestern University of Evanston, Illinois in 1925, and an MA, also in philosophy, from Cornell University in 1927. He taught mathematics while preparing for his PhD, which was awarded at the University of Chicago in 1937. His thesis dealt with the topic of the calculus of variations.

After receiving his doctorate, Householder concentrated on the field of mathematical biology, working with several other researchers with Nicolas Rashevsky at the University of Chicago.

In 1946, Householder joined the Mathematics Division of the Oak Ridge National Laboratory, where he was appointed chair in 1948; it is during this period that his interests shift toward numerical analysis. In 1969 he left ORNL to become Professor of Mathematics at the University of Tennessee, where he eventually became chairman. In 1974 he retired to and went to live in Malibu, California.

Householder has contributed in different ways to the organization of research. He has been president of the American Mathematical Society, president of SIAM and of the Association for Computing Machinery. He was a member of the redactional committees for Psychometrika, Numerische Mathematik, Linear Algebra and Its Applications, and has been editor in chief of the SIAM Journal on Numerical Analysis. He opened up his wide personal bibliography on numerical algebra in form of a KWIC index. He also organized the important Gatlinburg Conferences, which are still held under the name Householder Symposia.

1969 Harry H. Goode Memorial Award
“For his impact and influence on computer science in general and particularly for his contributions to the methods and techniques for obtaining numerical solutions to very large problems through the use of digital computers, and for his many publications, including books, which have provided guidance and help to workers in the field of numerical analysis, and for his contributions to professional activities and societies as committee member, paper referee, conference organizer, and society president.”
Learn more about the Harry H. Goode Memorial Award