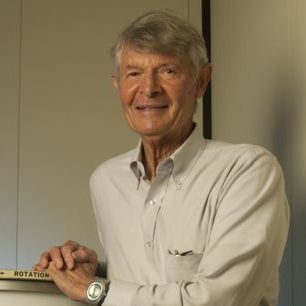 Albert S. Hoagland retired from Santa Clara University in 2005, on establishing the Magnetic Disk Heritage Center (MDHC) as a California non-profit organization and is their executive director. The RAMAC restoration project he initiated in 2002 at Santa Clara University has been relocated along with an MDHC office at the Computer History Museum in Mountain View, CA where the project is now being pursued.

He received his Ph.D. from UC Berkeley. While a graduate student, he became a consultant to IBM with key magnetic head design and recording responsibilities for the Random Access Method of Accounting and Control (RAMAC) disk drive, the first hard disk data storage device. Later he joined IBM, making major contributions to magnetic disk storage technology and the design of magnetic disk drives, including the first studies on track following servo positioning. With IBM for many years, including serving as Director for Technical Planning for the IBM Research Division, he played a principal role in the formation and leadership of an Industry/University consortium that established the first University Centers to support data storage technology. He left IBM in 1984 to found and be Director of the Institute for Information Storage Technology (IIST) at Santa Clara University and a professor of Electrical Engineering.  He later established and also ran the Magnetic Disk Heritage Center (MDHC) at Santa Clara University in 2001, whose mission is to preserve the story and historical legacy of the beginnings of magnetic disk storage at 99 Notre Dame, San Jose, California, where it all began.

A Fellow of the IEEE, he is a past president of the IEEE Computer Society and the American Federation of Information Processing Societies, served on the IEEE Board and Magnetic Recording Conference (TMRC) Advisory Board. He is a Trustee of the Charles Babbage Foundation.

Dr. Hoagland is author of the well-known book “Digital Magnetic Recording” as well as numerous publications in the fields of magnetic recording and data storage, including a seminal paper on magnetic data recording theory and head design that received an IEEE award.