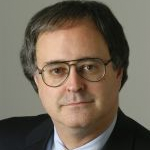 Alan Jay Smith is a Professor in the Computer Science Division of the Department of Electrical Engineering and Computer Sciences, University of California, Berkeley, California, USA, where he has been on the faculty since 1974; he was vice chairman of the EECS department from July, 1982 to June, 1984. His research interests include the analysis and modeling of computer systems and devices, computer architecture, and operating systems. He is particularly known for his work on CPU cache memories, disk caches, fi le migration, branch prediction, I/O performance, and benchmarking.

He was raised in New Rochelle, New York, USA. He received the B.S. degree in Electrical Engineering from the Massachusetts Institute of Technology, Cambridge, Massachusetts, and the M.S. and Ph.D. degrees in Computer Science from Stanford University, Stanford, California. He was an NSF Graduate Fellow.

Dr. Smith is a Fellow of the Institute of Electrical and Electronic Engineers, a Fellow of the Association for Computing Machinery, a Fellow of the American Association for the Advancement of Science, a member of IFIP Working Group 7.3, the Computer Measurement Group, Eta Kappa Nu, Tau Beta Pi, Sigma Xi and IEEE’s Golden Core. In 2003, he received the A. A. Michelson Award from the Computer Measurement Group (CMG); the award is given as a lifetime achievement award for making significant, lasting contributions to the fi eld of computer measurement and performance. He has published a large number of research papers, including one which won the IEEE Best Paper Award for the best paper in the IEEETC in 1979. He was on the Board of Directors (1993-2003), and was Chairman (1991-93) of the ACM Special Interest Group on Computer Architecture (SIGARCH), was Chairman (1983-87) of the ACM Special Interest Group on Operating Systems (SIGOPS), was on the Board of Directors (1985-89) of the ACM Special Interest Group on Measurement and Evaluation (SIGMETRICS), has been on the executive committee of the IEEE TC on Microprocessors and Microsystems (TCMM) since 1996, was an ACM National Lecturer (1985-6) and an IEEE Distinguished Visitor (1986-7), was an Associate Editor of the ACM Transactions on Computer Systems (TOCS) (1982-93), is a subject area editor of the Journal of Parallel and Distributed Computing, was on the editorial board of the Journal of Microprocessors and Microsystems (1988-2005), and is on the editorial board of Microprocessor Report. He was program chairman for the Sigmetrics ‘89 / Performance ‘89 Conference, program co-chair for the Second (1990) Sixth (1994), Ninth (1997) and Seventeenth (2005) Hot Chips Conferences, numerous program committees and given several keynote talks.  He also consults widely with computer and electronics companies.