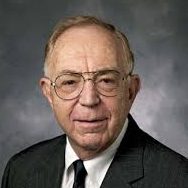 Feigenbaum received the award “for pioneering work in artificial intelligence, including development of the basic principles and methods of knowledge-based systems and their practical applications.” The Pioneer Award is given for significant contributions to early concepts and developments in the electronic computer field, which have clearly advanced the state-of-the-art in computing.

DENDRAL’s groundbreaking accomplishments inspired an evolution of expert systems, moving artificial intelligence out of the laboratory and into countless software applications. It also changed the framework of AI science: the power of an AI program came to be seen as largely in its knowledge base, not in its inference processes.

From 1994 to 1997, he served as chief scientist of the US Air Force; and was awarded its Exceptional Civilian Service Award. Feigenbaum is a 1994 ACM Turing Award recipient, an inaugural member of the IEEE Intelligent Systems Artificial Intelligence Hall of Fame, and a member of the Computer History Museum’s Hall of Fellows.

He is a member of the National Academy of Engineering, the American Academy of Arts and Sciences, and was the first recipient of the Feigenbaum Medal of the International Congress on Expert Systems. The Feigenbaum Prize is awarded biennially by AAAI, (Association for the Advancement of Artificial Intelligence (AAAI).

The Computer Pioneer Award was established in 1981 by the Board of Governors of the IEEE Computer Society to recognize and honor the vision of those people whose efforts resulted in the creation and continued vitality of the computer industry. The award is presented to outstanding individuals whose main contribution to the concepts and development of the computer field was made at least 15 years earlier. The recognition is engraved on a bronze medal specially struck for the Society.