LOS ALAMITOS, Calif., 7 September 2022 –  The IEEE Computer Society (IEEE CS) and the Association for Computing Machinery (ACM) have named Ian Foster, a pioneer in cloud and high-performance computing, as the 2022 recipient of the ACM/IEEE CS Ken Kennedy Award. 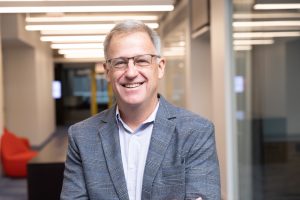 Foster, the Arthur Holly Compton Distinguished Service Professor in the Department of Computer Science at the University of Chicago and Distinguished Fellow and Senior Scientist at the Department of Energy’s Argonne National Laboratory, was cited for “the establishment of new programming models and foundational science services.”

The ACM/IEEE CS Ken Kennedy Award recognizes substantial contributions to programmability and productivity in computing and substantial community service or mentoring contributions. Foster will receive the award in November at the 2022 International Conference for High Performance Computing, Networking, Storage, and Analysis (SC22).

Foster was nominated for the award for several influential projects enabling the use of high-performance and distributed computing systems for accelerating scientific discovery in fields ranging from physics, chemistry, and astronomy to climate science, biomedicine, and materials science. The Globus platform that he founded in 2010 with Steve Tuecke and others today has more than 300,000 registered users in 80 countries. This cloud-based software and services for data-intensive research allow scientists to easily transfer, share, and compute on massive datasets.

Globus evolved from innovations by Foster and his colleagues in the field of grid computing, which capitalized upon the early availability of high-speed internet to create coordinated and distributed networks supporting large-scale scientific research. These grids were instrumental for major scientific collaborations such as the observation of the Higgs boson at CERN’s Large Hadron Collider and the science underlying the assessments of the Intergovernmental Panel on Climate Change (IPCC). Today, grid concepts underpin the cloud that is fundamental to much of modern society.

With colleagues such as Steve Taylor, Carl Kesselman, Mike Wilde, and Kyle Chard, Foster has also built new programming languages and systems for high-level parallel computing, including Strand, Nexus, Swift, Parsl, and FuncX. Using these tools allows scientists to tap into large and distributed high-performance computing resources, splitting up their data and tasks for faster execution.

“I am honored to receive the Ken Kennedy Award from the ACM and IEEE,” Foster said. “I have been blessed to work with so many fantastic collaborators and students during my career–not least Ken Kennedy–-and it is deeply fulfilling to see the systems we built used to push forward scientific frontiers in a multitude of fields.”

In addition to his research, Foster has contributed to science as a communicator, educator, and mentor. He has authored or co-authored oft-used textbooks on parallel computing, grid computing, data-intensive social science, and cloud computing for science and engineering. At the University of Chicago and Argonne, he has advised and managed hundreds of students and early-career research scientists. From 2006 to 2018, Foster directed the Computation Institute, a joint initiative of UChicago and Argonne that developed and applied new computational methods across multiple fields of science and scholarship, and he currently directs Argonne’s Data Science and Learning Division.

In addition to the Ken Kennedy Award, Foster has received the IEEE CS Charles Babbage Award, the Lovelace Medal of the British Computing Society, and the Gordon Bell Prize for High-Performance Supercomputing. He is a fellow of the AAAS, ACM, BCS, and IEEE, and a DOE Office of Science Distinguished Scientists Fellow.

ACM and IEEE CS co-sponsor the Kennedy Award, which was established in 2009 and named for the late Ken Kennedy, founder of Rice University’s computer science program and a world expert on high performance computing. The Kennedy Award carries a US $5,000 honorarium endowed by IEEE CS and ACM.