The IEEE CS Technology Predictions for 2022 will be revealed in January – sign up for free exclusive access.

“Last year was as unpredictable as 2020, and not surprisingly our predictions were graded the same as in the previous year, averaging a B- score,” said Dejan Milojicic, former IEEE CS president (2014) and current Distinguished Technologist at Hewlett Packard Labs. “The advancement of technologies requiring a remote workforce due to the pandemic was certainly accelerated, while most other technologies were not accelerated as much. We look forward to finalizing the 2022 predictions and tracking the paths of the most rapidly moving developments in the year ahead.”

Remote workforce technologies (graded A) were strongly driven by the need for work continuity; they were critical for many industries and professions in which physical presence was not required. HPC as a Service (graded B+) enabled remote access to high-performance resources critical in pandemic evaluations. In-memory computing (graded B) was deemed to have made progress in the last year. 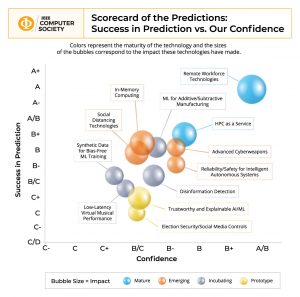 In addition to measuring the success in prediction, this year the team tracked technology maturity, their confidence, and the impact the technologies have made, presented in the “Scorecard of the Predictions” graph.  All values for these four categories were assigned by averaging their individual grading per each technology predicted last year from A to F. For maturity, they were motivated by the technology readiness level which was adjusted for that purpose. They mapped A-F respectively as mature, emerging, incubating, prototype, conceptual, and unsuccessful. In the graph, bubble color corresponds to maturity level, bubble diameter corresponds to impact, and success in prediction and our confidence are represented on Y and X axes respectively. If some predictions are ranked the same alphabetic grade, numerically they may differ which is reflected in their ranking order. This is presented in the rank-ordered list that follows the graph. The team will continue to experiment with scorecards in the next year including simplifying summary graphs, introducing trending, and eliminating perceived correlation across metrics.

The 2021 technologies predicted last year are listed, rank-ordered by the success of the predictions. The current grade is included, followed by a comparison to how they were ranked last year (→ means the same rank; ↑means improved rank; ↓means decreased rank).

1    Remote workforce technologies (graded A, →). In hindsight, it was obvious that remote technologies, such as collaborative tools and remote presence would be very successful. This is true in a variety of use cases, such as education, manufacturing, and healthcare, none of which were deemed easily conducted remotely before the pandemic. The team was very confident about this technology,  the impact was high, and the technologies evolved to be more mature. This technology was exactly where it was predicted to be, ranking 1.

2    HPC as a Service (graded B+, ↑). The team predicted the delivery of High Performance Computing as a Service (HPCaaS) as it is increasingly embraced among HPC users. The convergence of AI, high performance data analytics, and HPC further fueled the growth and adoption of HPCaaS. Similar to remote workforce technologies, the confidence of the team was high, the impact was high and the technology reached maturity level. This technology overperformed compared to the prediction last year (rank 6).

3    In-memory computing (B+, ↑). Although in-memory computing is still not a mature technology, several emerging implementations reached beyond prototypes and have resulted in relatively high ranking, although with somewhat lower confidence. This is amplified by the potentially huge impact this technology could have on the market, in particular in edge and endpoint systems requiring low power. This technology significantly overperformed compared to the prediction last year (rank 10).

4-5 Machine Learning (ML) for additive and subtractive manufacturing (B, ↑) and advanced cyberweapons (B, ↑) share positions 4-5, with exactly the same ranking. The advancements of both technologies were correctly predicted. The impact of ML for additive manufacturing is slightly amplified by the pandemic and need for remote work, but maturity is still lower than advanced weapons. Advanced cyberweapons were equally amplified by the pandemic and have unfortunately achieved a higher degree of maturity, as evidenced by a number of attributed or assumed cyberattacks that took place last year. (They were ranked 11 and 12 last year.)

7    Reliability/safety challenges for intelligent autonomous systems (B-, ↓). The team continues to believe in the importance of these technologies but expected a slightly higher rate of progress during the past year. Automation is one of the enablers in many other technologies, including remote workforce technologies and social distancing as discussed above, but it just may be that its time has not as yet arrived. Last year these technologies shared first place with remote workforce and social distancing, so they, too, significantly underperformed.

10 Low latency virtual musical rehearsal and performance (B/C, ↓). This is a relatively narrow market but a nice success story that enabled musical performances and rehearsals last year. There are already some early products on the market and new ones coming. Last year, this technology ranked 9.

11 Trustworthy and explainable AI/ML (C+, ↓). These technologies continue to have huge importance, but unfortunately, little progress has been made during the past year, in the direction of trustworthiness and explainability, which are closely tied. New hardware and software approaches offer some potential but have not been realized. This technology has the least maturity. Last year, these technologies were ranked 8.

12 Election security / social media controls (C, ↓). Similar to social distancing and disinformation detection, election security and social media controls were not successful this year. Another reason for the lack of progress is their close tie-in with governance, which is extremely complex to introduce. Also similar to the previous technologies, these have less maturity. Last year, these technologies were ranked 7.

Following the established process from previous years, the authors who originally made the predictions in November 2020 evaluated their predictions individually. The averages and standard deviations were used as a basis for the discussion that eventually resulted in the final rating.

Sign up to receive the 2022 Tech Predictions to be announced in January.