LOS ALAMITOS, Calif., 7 June 2021 – The Association for Computing Machinery (ACM) and the IEEE Computer Society (IEEE CS) have named Margaret Martonosi as the recipient of the 2021 ACM/IEEE CS Eckert-Mauchly Award. Martonosi is the Hugh Trumbull Adams ‘35 Professor of Computer Science at Princeton University.

“The committee is pleased to put forward Professor Margaret Martonosi, Princeton University, as this year’s winner of the Eckert Mauchly Award for her pioneering contributions to power-aware computing and opportunistic/mobile sensing,” said Per Stenström, Chalmers University of Technology and 2021 Eckert-Mauchly Award Subcommittee Chair.

“I was thrilled to hear the news about receiving the Eckert-Mauchly award,” said Margaret Martonosi.  “Even more so, it is wonderful to be able to share this with the students and co-authors whose work this also honors.” 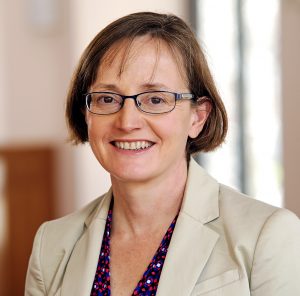 The Eckert-Mauchly Award is widely known as the computer architecture community’s most prestigious award. Martonosi is being recognized “for contributions to the design, modeling, and verification of power-efficient computer  architecture.” Specifically, the Eckert-Mauchly Award honors Martonosi’s contributions, in work done with her student advisees and other co-authors, in the following areas:

Martonosi’s current research focuses on hardware-software interface issues in both classical and quantum computing systems. On the classical side, these include early-stage axiomatic verification approaches for memory consistency models in concurrent systems. In quantum computing, her research group explores full-stack toolflows for closing the resource gap between quantum algorithms and implementations.

Martonosi is a member of the National Academy of Engineering and the American Academy of Arts and Sciences. She is a Fellow of both the IEEE and ACM. Martonosi is an inventor on several granted US patents, and she has co-authored two technical reference books on power-aware computer architecture. She completed her PhD at Stanford University.

Martonosi will receive the Eckert-Mauchly Award during the ACM/IEEE International Symposium on Computer Architecture (ISCA) to be held 14 to 19 June 2021.

The Eckert-Mauchly Award was initiated in 1979 and comes with a US $5,000 prize. Award nominations are due on 30 March of each year.  The award selection process began in April and Martonosi was notified 20 May as the winner of the Award.

The award was named for John Presper Eckert and John William Mauchly, who collaborated on the design and construction of the Electronic Numerical Integrator and Computer (ENIAC), the pioneering large-scale electronic computing machine that was completed in 1947.

The IEEE Computer Society is the world’s home for computer science, engineering, and technology. A global leader in providing access to computer science research, analysis, and information, the IEEE Computer Society offers a comprehensive array of unmatched products, services, and opportunities for individuals at all stages of their professional career. Known as the premier organization that empowers the people who drive technology, the IEEE Computer Society offers unparalleled international conferences, peer-reviewed publications, a unique digital library, and training programs. Visit www.computer.org for more information.