LOS ALAMITOS, Calif., 29 March 2019 – Rajesh K. Gupta, professor of computer science and engineering at University of California, San Diego, has been selected to receive the IEEE Computer Society 2019 W. Wallace McDowell Award. Gupta is being recognized “for seminal contributions in design and implementation of Microelectronic Systems-on-Chip and Cyberphysical Systems.”

Gupta currently serves as founding director of the Halıcıoğlu Data Science Institute at UC San Diego. His research is in embedded and cyber-physical systems with a focus on sensor data organization and its use in optimization and analytics. He has led several large scale projects including NSF Expeditions on Variability and DARPA projects under Data Intensive Systems (DIS) and Circuit Realization at Faster Timescales (CRAFT) programs. 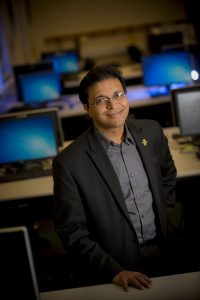 He also leads NSF project MetroInsight and a co-PI on DARPA/SRC Center on Computing on Network Infrastructure (CONIX) with the goal to build new generation of distributed cyber-physical systems that use city-scale sensing data for improved services and autonomy. His past contributions include SystemC modeling and SPARK parallelizing high-level synthesis, both of which have been incorporated into industrial practice.

Among recent recognition of Gupta’s work is a best demonstration paper award at ACM BuildSys’16. He has served as EIC of IEEE Design & Test of Computers and founding EIC of IEEE Embedded Systems Letters. He currently serves as Editor-in-chief of IEEE Transactions on Computer-Aided Design of Integrated Circuits and Systems.

Gupta holds the Qualcomm Endowed Chair in Embedded Microsystems at UC San Diego and INRIA International Chair at the French international research institute in Rennes, Bretagne Atlantique. He is a Fellow of the IEEE, the ACM and American Association for the Advancement of Science (AAAS).

The award consists of a bronze medal and a $2,000 honorarium.  The award will be presented at the awards dinner held on Wednesday evening, 5 June 2019 at the Hyatt Regency Coral Gables, Florida during the IEEE Computer Society Board of Governors meeting.

Learn more about the W. Wallace McDowell Award, including a complete list of past recipients.