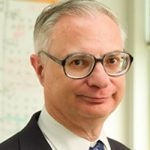 An author of nine textbooks and over 475 papers, Siewiorek is being recognized “for contributions to computer architecture, wearable computing, and human computer interaction education through his pioneering textbooks, mentoring, and leadership.”

Siewiorek is the former Director of the Quality of Life Technology NSF Engineering Research Center, and previously served as Director of the Engineering Design Research Center and co-founder of its successor organization, the Institute for Complex Engineered Systems. He also served as Department Head of the Human Computer Interaction Institute, Chairman of the IEEE Technical Committee on Fault-Tolerant Computing and as founding Chairman of the IEEE Technical Committee on Wearable Information Systems.

A Fellow of IEEE, ACM, and AAAS, and a member of the National Academy of Engineering, Siewiorek has been the recipient of the AAEE Terman Award, the IEEE/ACM Eckert-Mauchly Award, and the ACM SIGMOBILE Outstanding Contributions Award.

The Taylor L. Booth Education Award commemorates individuals who have an outstanding record in computer science and engineering education, as established by some of the following criteria: achievement as a teacher of renown in a relevant and applicable course; writing an influential text; leading, inspiring, or providing significant educational content during the creation of a curriculum in the field; and inspiring others to a career in computer science and engineering education.

The award consists of a bronze medal and $5,000 honorarium, and will be presented at a dinner and ceremony to be held on 6 June 2018 in Phoenix, Arizona.

Further information about the award, including a list of past recipients, is available at https://www.computer.org/web/awards/booth.