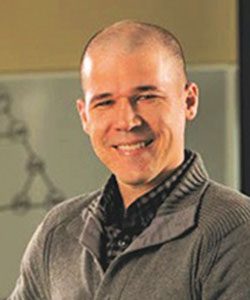 Doom was recognized by the IEEE Computer Society “for tremendous contributions to Computer Science and Engineering through a balanced career incorporating research, mentoring of students, curriculum and pedagogy development, and service.”

Serving as the Faculty President of WSU, Doom is a co-director of WSU’s bioinformatics research group and pursues research in the fields of undergraduate engineering education, data science, bioinformatics, and digital/computer systems. His education research focuses on the impact of active learning and culturally relevant teaching on student success in STEM.

Doom expressed that he would not mind being remembered as someone who spent “too much effort” on his teaching.  He was awarded the position of WSU’s Robert J. Kegerreis Distinguished Professor of Teaching (2014-2017), was awarded an Outstanding Engineers’ and Scientists’ Award (Education) by the Affiliate Societies Council of Dayton (2015), and was Southern Ohio Council for Higher Education’s (SOCHE) awardee for Excellence in Teaching (2014).  Doom served on the Faculty Advisory Board for WSU’s Center for Teaching and Learning from 2014 to 2016.

A WSU faculty member since 1998, Doom was the 2000 and 2005 recipient of the WSU College of Engineering Excellence in Teaching award, a 2001 invitee to the Ohio Teacher’s Excellence Program (OTEP), and a 2002-sponsored attendee of the National Effective Teaching Institute (NETI). Doom has disseminated his educational work through venues including the American Society for Engineering Education (ASEE), the ACM special interest group on computer science education (SIGCSE), and IEEE Transactions on Education. Teaching interests include both undergraduate and graduate computer science, computer engineering, and electrical engineering courses.

The Computer Science & Engineering Undergraduate Teaching Award is given in recognition of outstanding contributions to undergraduate education through both teaching and service. The award consists of a plaque, certificate, and a $2,000 honorarium, and an invitation to give a talk during the presentation at a dinner and ceremony on 6 June 2018 in Phoenix, Arizona.

View more information about the award, including a list of past recipients.