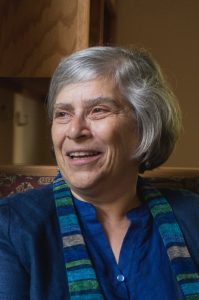 Most notably, she provided key testimony before Congress in the controversial 2015-2016 dispute between the FBI and Apple, which sought to determine the extent to which courts could force manufacturers to unlock smartphones with cryptographically-protected data.

She has been a senior staff privacy analyst at Google, a Distinguished Engineer at Sun Microsystems, and a faculty member at Worcester Polytechnic Institute, the University of Massachusetts Amherst, and Wesleyan University.

We asked Landau for tips in handling career obstacles and finding inspiration. Here’s what she said.

You never know what opportunities await. Upload your resume to our Jobs Board.

How Women in Tech Can Overcome Setbacks

Computer Society: As a woman in tech, do you have any learning experiences you could share to benefit women just starting out in their STEM careers?

Landau: First, acknowledge to yourself when you run into an unfair situation. Sometimes you need friends and colleagues to help you understand what happened. (Note that these can be friends of both genders.)

Sometimes you can confront the unfair situation, sometimes not; in the latter case, the cost may simply be too high to be worth it. But once you’ve done the acknowledgment—and the response if you have one—move on.

Remember why you do what you do, and focus on that. It’s not always easy to get past the unfair situation, but if you get stuck in anger and pain; they’ve won. If you move on and succeed, you’ve won—and done so many times over.

Computer Society: What advice would you give college students to give them an advantage over the competition?

Landau: It’s really important to be able to explain technology to non-experts; working on doing so is really useful. It takes lots of effort to learn how, but it is definitely worth it. So write well, which includes thinking clearly and being analytical. Work on these does not always come naturally to those in computer science, but articulate, clear thinking engineers and scientists are greatly valued.

Computer Society: In your profession, who is your hero?

Landau: I have many.

Joseph Rotblat, a Polish physicist who worked on the Manhattan Project, leaving it when it was discovered that the Germans had not succeeded in building a nuclear weapon (that had been Rotblat’s reason for participating in the project). He was the only one to leave the project before the atomic bomb was used. Rotblat later went on to found Pugwash, an international organization of senior scientists who meet as scientists and who were behind the nuclear test ban treaty, many of the treaties on chemical and biological weapons, and so on. Rotblat was a shining example of a scientist thinking about the policy implications of his work—and acting on it. Rotblat and Pugwash won the Nobel Peace Prize in 1995.

Anita Borg, for starting Systers.org and helping to create a community of women computer science researchers.

The people at Sun Microsystems—Scott McNealy, James Gosling, Greg Papadopoulos, Bob Sproull, and many others—who created a vibrant engineering company that was not afraid to take a long-term view on technology innovation. The company folded, but the ideas it had, and the ethos it inspired, live on, and I greatly appreciate that.

David Clark, my research colleague and friend, who constantly inspires me with his deep questions about network architecture and issues of identity, privacy, and security.

Karen Sparck Jones, whose work in natural language processing was deep and fundamental, laying the groundwork for search engines—and who persevered despite her lack of a regular academic appointment.

The next generation of women in computer science, including my friends Jen Rexford and Kathleen Fisher, who, facing a different set of challenges than my generation did, are moving into positions of leadership with skill, deep smarts, and great dexterity.

How Women in STEM Can Stay Inspired

Computer Society: What rejuvenates your intellectual and creative energy the most?

Landau: The things that rejuvenate me are a walk in the woods with my dog, and travel with my husband, with plenty of time for walking, talking, and reading. I also enjoy good theater, including and especially Shakespeare.

Computer Society: How do you deal with difficult people?

Landau: Time is finite, life is rich; some difficult people are not worth the trouble. For the others—or situations in which I must deal with them—I use the situation to challenge myself. Can I find some way to learn something from the other person, some way I’ve gained from the interaction? If so, we’ve both won—which is much the best situation.

The IEEE Computer Society’s Lori Cameron interviewed Landau for this article. Contact her at l.cameron@computer.org if you would like to contribute to a future article on computing careers.