“For important contributions to theory and practice of compiler optimization and leadership in the development of software for parallel computation.” 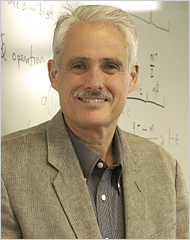 Kenneth W. (Ken) Kennedy‘s seminal work on interprocedural and intraprocedural analysis techniques, which build on his insights in data flow analysis; similarly his work on dependence analysis provided a key technical underpinning for automated detection of parallelism. In both of these areas the theoretical impact of this work was matched by a tremendous practical impact, as Kennedy’s work has had a profound influence in the commercialization of automatic vectorizing and parallelizing compilers. This work has been incorporated into the inner workings of a number of commercial systems from HP/Convex, Cray Research, Digital Equipment, IBM, Masspar, Thinking Machines, the Portland Group, Pacific-Sierra Research, and Applied Parallel Research. Successes such as these allowed Kennedy to play a crucial role in building a creative bridge between academic IT research and the industrial and commercial world.

Kennedy received many awards during his 36-year career, including the 1967 Hugh Cameron Award for Service to Rice, the 1999 Lifetime Achievement Award from the Association of Computing Machinery’s Special Interest Group on Programming Languages; and the 2002 Distinguished Alumnus Award from the Association of Rice Alumni. In 2002, he was promoted to University Professor, only the fourth person in the history of the school to receive such an honor. In recognition of his achievements in compilation for high-performance computer systems, he was given the 1995 W. Wallace McDowell Award, the highest research award of the IEEE Computer Society.

Kennedy authored more than 200 papers and wrote two books. He was a Fellow of the ACM, the American Academy of Arts and Sciences, the American Association for the Advancement of Science, and IEEE. He was also a member of the National Academy of Engineering. He was an active participant in the SC conference series and the ACM/SIGPLAN conferences.