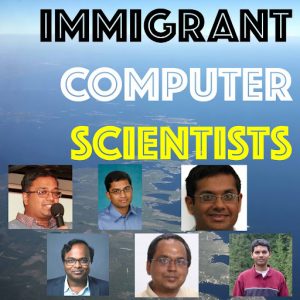 Presenting – The premiere episode of Immigrant Computer Scientists Podcast Season 2! This kind of episode has never been done before! Together in one room – seven graduates from IIT Madras (Chennai) India, Computer Science and Engineering Bachelors’ degree batch of 1998. Of them, three are startup founders, three are industry long-timers (and the host, Indy Gupta, is a Professor). In 1994, all these individuals wrote the IIT JEE 1994 (IIT Joint Entrance Exam), considered one of the toughest exams in the world. In 1994 only those ranked in the top 48 spots in the entire nation of India, among 200,000 candidates, were admitted to IIT Madras’ Computer Science cohort.

Our discussion covers a range of topics, starting from our individual immigrant journeys, to everyone’s perspectives on the IITs, on India, on technology, and on life as Indian immigrants in the US. Surprises abound! We discover new things about each others’ backgrounds. And some of us make surprising revelations about how our outlook has changed in the 23 years since we came to the US, and some of us divulge surprising plans for our futures. Together, these seven comprise nearly 25% (7 out of 30) of those from the IIT Madras CS cohort of 1998.

This is Part 1 of 2 in this conversation.

This episode is the first of three episodes focused on India and will be released during the month of February.