Dean at the UCLA Henry Samueli School of Engineering and Applied Science.
Share this on: 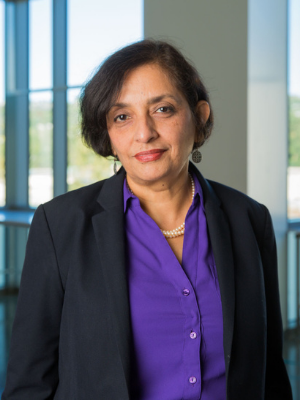 Jayathi Y. Murthy is Ronald and Valerie Sugar Dean at the UCLA Henry Samueli School of Engineering and Applied Science, with 190 faculty members, and more than 6,000 undergraduate and graduate students.

Jayathi Y. Murthy My technical field is in computational fluid dynamics and heat transfer. I have developed numerical techniques to simulate fluid flow, heat and mass transport in applications such as automotive aerodynamics, chemical and materials processing, electronics cooling and many others. Over the last few years, I have also been working in the area of sub-micron thermal transport, focusing on how heat is generated and transferred at very small length scales, with applications to microelectronics.

I chose this field because it combines many exciting areas: the development of new mathematical techniques, complex physics, and the use of new and evolving computer hardware to solve ever more complex problems. Also, increasingly, we want to use simulation early in the design cycle to quickly and inexpensively identify promising design ideas and approaches and to eliminate unsuitable ones. Simulation also allows us to ask and answer the “what-if” questions quickly and inexpensively.

Jayathi Y. Murthy I think the greatest challenge in my research career has been to ask interesting, relevant and challenging questions to push the field forward. It is easy to simply do the thing that you have always done – you know the field, you’re good at it, and it is always possible to continue to work incrementally. But the most interesting questions are those you don’t know the answers to, and particularly those you don’t really know how to begin to answer. If you are successful in finding important problems to solve, the greatest reward is in making an important contribution to solving them. Another really satisfying thing for me is teaching – I have always loved teaching, and it continues to be a source of great pleasure. It is a wonderful feeling to see your students come away from your classes excited about the subject and wanting to explore further.

Jayathi Y. Murthy My journey began with an undergraduate degree in Mechanical Engineering, which I obtained from the Indian Institute of Technology in Kanpur, India. I was good at math and science in school, and was inspired by my father, who was an excellent civil engineer. He graduated from engineering school at the time India had just gained independence from the British, and built some of the first railway bridges in remote parts of India. I saw what a huge difference his work made in these places. I came to the U.S. for graduate school and stayed on to pursue my engineering career in this country. It has been a fun and rewarding ride!

Jayathi Y. Murthy I’ve worked in both academia and industry and each has its own attractions. I spent a decade early in my career with a small software startup, Fluent Inc., which was one of the pioneers developing commercial computational fluid dynamics software. I was one of the early employees of the company. It was a lot of fun working in a startup and I learned a lot about doing real-world engineering. I am proud to say that the software we developed is very widely used to this day. I came back to academia and have worked in both research and teaching roles, and more recently, in administrative roles, first as a department chair, and now, as dean. I have really enjoyed this mix, and am glad to have had the flexibility to move from one to the other as my career evolved.

Who is one female role model who you personally admire and why?

Jayathi Y. Murthy I am blown away by the early female pioneers – women like Marie Curie or Rosalind Franklin. They were so early to the game – so early that society could not even conceive of the idea that women could be playing the kind of roles that they did. It must have taken enormous imagination for them to even visualize a scientific life for themselves, and to pursue excellence so doggedly.

Jayathi Y. Murthy is Ronald and Valerie Sugar Dean at the UCLA Henry Samueli School of Engineering and Applied Science, with 190 faculty members, and more than 6,000 undergraduate and graduate students. Murthy is also a distinguished professor in the Mechanical and Aerospace Department.

UCLA Samueli is recognized around the world as a leader in engineering education, research and service. Established in 1945, the school has developed generations of rigorously trained engineers and been a home for solutions to challenges in critical fields including energy, sustainability, healthcare, communications, transportation, infrastructure and information technology. As the first woman dean at UCLA Engineering, Murthy has made expanding access to a UCLA engineering education a top priority. This includes deepening relationships with area community colleges, increasing outreach to underrepresented minorities and easing the transition for transfer students. She also led the effort to establish WE@UCLA – a program that supports the full participation of women in engineering.

Murthy’s research interests include nanoscale heat transfer, computational fluid dynamics, and simulations of fluid flow and heat transfer for industrial applications. Recently, her focus is on sub-micron thermal transport, multiscale multi-physics simulations of micro- and nano-electromechanical systems (MEMS and NEMS), and the uncertainty quantifications involved in those systems.

Before joining UCLA Engineering as dean in January 2016, Murthy was chair of the Department of Mechanical Engineering at the University of Texas at Austin, and held the Ernest Cockrell Jr. Memorial Chair in Engineering. From 2008 to 2014, Murthy served as the director of the Center for Prediction of Reliability, Integrity and Survivability of Microsystems (PRISM), a center of excellence supported by the National Nuclear Security Administration (NNSA). Murthy was an early employee of New Hampshire-based Fluent Inc., a developer and vendor of the world’s most widely used computational fluid dynamics software. She led the development of algorithms and software that still form the core the company’s products.

Murthy received a Ph.D. in mechanical engineering from the University of Minnesota, an M.S. from Washington State University and a B. Tech from the Indian Institute of Technology, Kanpur, where she was named a distinguished alumna in 2012. She is a fellow of the American Society of Mechanical Engineers (ASME) and the author of more than 300 technical publications. She is the recipient of many honors, including the ASME Heat Transfer Memorial Award in 2016 and the ASME Electronics and Photonics Packaging Division Clock Award. She is a member of the National Academy of Engineering  and a Foreign Fellow of the Indian National Academy of Engineering.