Networking: It's More than Sharing Meatballs:
Practical Advice on How to Build and Use Professional Networks 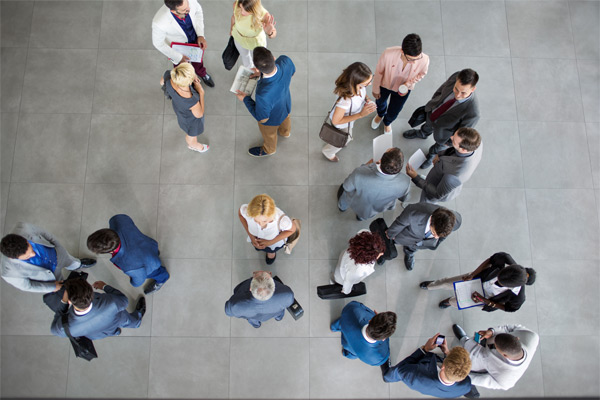 Networking is the most powerful tool you have in your career-planning kit. It is the secret to finding hidden opportunities; it establishes and solidifies your value in the minds of decision-makers; it opens doors to hitherto unknown people, alliances, and information. The bottom line? Networking secures jobs and advances careers.

But the challenge of networking is that most people don’t know what it is or how to do it.

Some, though surely not you, dear reader, think that “networking” is a finite action that takes place at an event, like a conference. They meet a professional at a mixer, and they partake of a witty quip and a meatball or two. When 10 minutes have elapsed and they can’t think of anything else to discuss, they excuse themselves and go!—the requisite networking is complete for the week (or year). They don’t follow up with the professional; in fact, in many cases, they never speak with him or her again.

What is the outcome of this brand of “networking”? Absolutely nothing—no new information, no new career opportunity, and no new potential collaboration. They may wonder why the interaction didn’t help them achieve anything. And they go back to applying for jobs advertised on the internet and banging their heads against the wall.

The truth is that networking is not a one-time meeting. Networking is:

Once you recognize these basic principles, you can begin to craft a networking strategy that will help realize your career ambitions.

Like many aspects of professional planning, your networking scheme should include its own objectives, activities to pursue, milestones, timelines, and deadlines. But before you launch your program, take care not to make these common mistakes:

Mistake Number 1: “I won’t network with people outside my field. Doing so is a waste of time.”

I read just such advice on Linkedin recently. The author encouraged young scientists to interact only with other scientists, which he rationalized with the example that a plumber could never help you in your career.

To my mind, this is faulty logic. You should interact with people in and outside of your field, industry, and even geography as much as possible because anyone can provide you with ideas, information, and inspiration that advances your career. Your acquaintance doesn’t have to be an academician in physics to help you solve a physics problem or land a job in higher education.

This kind of strategic thinking has aided me many times. Once, while sitting in the middle seat of an airplane, I listened to the people on either side of me discuss plans for approaching editors. My science writer ears perked up and I interrupted their conversation to introduce myself. “Are you in journalism?” I asked. No, they responded, they were in public policy for the nuclear regulatory industry.

At that time, nuclear science wasn’t even on my career radar as a potential field for collaboration. But once I got them talking about their passion for the field and understood exactly what they did, the three of us recognized an opportunity to partner on a project. They told me about a nuclear science conference that occurs in my state every year, and I was able to convert that tip into real work.

Mistake Number 2: “I will network in order to extract something from someone else.”

The foundation of networking is building strong collaborations that provide value to both individuals. Of course you need a job, but the other person needs things too, like connections with other potential partners, career leads, or ideas about funding sources. You should seek to craft an alliance based not on grabbing what you can from each other, but rather on learning how to ensure that the relationship continues to harness both of your specific values.

Early-career professionals should offer to be of assistance, even if they don’t immediately see a potential return on the investment (ROI). It’s surprising how much others appreciate the offer of help and how immediately such a proposal can solidify a relationship. I once read an article in a trade magazine that I especially enjoyed and contacted the author to discuss it.

At the end of our conversation, I asked her to contact me in the future if I could help her in any way. “Even if I am not the right person,” I said, “I will find the right person or resource for you.” She expressed gratitude, and what’s more, she soon followed up with me. That one gesture started a partnership that has lasted more than a decade, and led to the development of mature networks for both of us.

Mistake Number 3: “I can’t network because I don’t have time.”

A smart way to get started is to recognize that there are two kinds of networking: active and passive. Active networkers purposefully seek out others to meet and with whom to connect. This may occur at conferences, symposia and journal clubs, or through reading papers and contacting authors.

Passive networkers interact with those with whom they cross paths. This could happen at any event, including those not related to science, such as philanthropic, pastime, or community activities.

My favorite kind of passive networking occurs on airplanes. You are trapped approximately three nanometers away from this guy for hours, so you might as well make the best of it. Strike up a conversation (as long as he’s not drunk.) From passively networking with people on planes, I have gained surprising knowledge about my industry, developed partnerships with new colleagues, and even landed a few gigs.

Don’t underestimate the use of social networks like LinkedIn for both active and passive networking. LinkedIn is starting to become a standard for hiring people—in fact, one industry decision-maker told me that the resumé is becoming obsolete and the LinkedIn profile is taking its place. Consider creating a free profile on LinkedIn and join groups relevant to your ambitions. (In a future article I will go into detail about how to leverage your social media presence for effective networking and career planning.)

Mistake Number 4: “I can’t network effectively because I am a shy, albeit rather good-looking, physicist.”

Efficient networking, where you are able to build long-term partnerships, takes practice. You don’t have to be an extrovert to network, and even outgoing personalities (and seasoned networkers) sometimes have butterflies in their stomachs when they first approach a stranger at a mixer. But the more practice you get at introducing yourself to others, the more adept and more comfortable you will become.

At networking affairs, one of my favorite opening lines is “what’s the best part of your job?” As the other person recounts what is pleasurable about her work, she will be more apt to speak with me about it. One of the keys to networking is that people generally love speaking about themselves. So the more you ask contacts about themselves and what drives them, the better you are able to start a beneficial relationship. As they speak, remain in eye contact. As people chat, I like to jot down a few notes on the back of their business cards. When I follow up later, I remember (and can remind them) of key points in our conversation.

So at the next APS Meeting, don’t be a wallflower and don’t let fear get the best of you. Just catch someone’s eye and launch a discussion. Remember—they are there to network too. And to scarf meatballs.