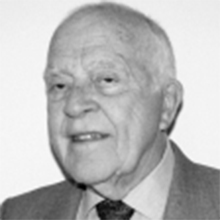 Vernon L. Schatz had his first exposure to computers when he began his career in 1951 as a customer engineer for IBM. His initial opinion of what he saw wasn’t very high. “I didn’t think they were worth the bother,” he states.

In 1952, he joined General Electric’s (GE) Aircraft Gas Turbine Division in Systems Development and, by 1956, his interest in and opinion of computers had increased considerably. He developed the first mechanized field failure analysis program for the aircraft industry. His interest in computers solidified, and he became the manager of Business Systems Computations for the division and pioneered several additional applications, including the first computerized information retrieval program for technical libraries. Schatz joined GE’s Computer Department in 1960. Between 1960 and 1969, he held a number of management positions within the department, including manager of the GE 225/235 family of computers. While at GE, he also developed the business plan for a large-scale and revolutionary family of computers from which several significant features of current computers can be traced, most notably the UNIX operating system.

In 1969, he joined the Jewel Companies (Jewel) as Vice President of Information Systems. There, he initiated and managed the first supermarket electronic point-of-sale development in the US, establishing the industry standard for such systems, which was subsequently duplicated by all of the major point-of-sale suppliers in the country. He also initiated the development of electronic funds transfer (EFT) between Jewel and their bank, First National Bank of Chicago (FNBC). While at Jewel, Schatz defined the fundamentals for a personal data card, which later came to be popularly known as the “smart card.” The card contained customer identification and pre-authorized financial transaction information with an integrated circuit to store and manipulate data. The card was designed to facilitate secured payment for purchases without going online to an authorization point for each transaction. He was granted the fundamental patent (#4,001,550) on this development.

The United States Patent Office regards this application as the basic patent for smart cards in the US. During the years of the patent’s useful life (1977-94), licenses were granted to six organizations, including VISA, through Schatz’s own company, Distributed Intelligence Access Systems (DIAS). In 1975, the chairmen of Jewel and FNBC concluded that EFT was more properly a banking function. Schatz’s operation was transferred from Jewel to FNBC, where it became Network Electronic Funds Transfer, Inc. (NEFTI), a subsidiary of FNBC. Schatz was named the first president of NEFTI and a vice president at FNBC. He continued development and implementation of the computerized electronic funds transfer network system for retail operations. This was the first such system in the US and was rare among retail funds transfer networks in that it could be used for deposits as well as direct debits. Through NEFTI, Schatz promoted EFT to FNBC’s other customers, and, ultimately, other banks began offering the same service.

Schatz has been a speaker and panel participant at more that 60 meetings of industry associations and professional societies in the US and abroad. He has served on the board of directors for several small corporations. He is the holder of three expired patents and has one patent pending related to smart card technologies. Schatz holds a bachelor’s degree in engineering from Iowa State University and a master’s of business administration from Xavier University in Cincinnati, Ohio. He served in the US Navy Seabees in New Guinea during World War II. He is a registered professional engineer and a past member of the advisory committee for the Illinois State Board of Higher Education, Computer Resources; the Committee for the Development of the Universal Product Code; the Institute of Industrial Engineers; and the Automotive Engineers, Aircraft Division.

2001 Computer Pioneer Award Recipient
“For the development of electronic funds transfer, which made possible computer-to-computer commercial transactions through the banking system.”
Learn more about the Pioneer Award