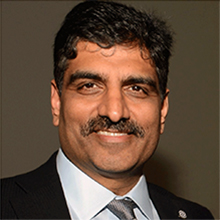 Venu Govindaraju is a Distinguished Professor of Computer Science and Engineering at the University at Buffalo (SUNY Buffalo). He received his B-Tech (Honors) from the Indian Institute of Technology (IIT), Kharagpur, India in 1986, and his PhD from UB in 1992.

Govindaraju has authored more than 300 scientific papers, including more than 60 journal papers. His seminal work in handwriting recognition was at the core of the first handwritten address interpretation system used by the US Postal Service. He was also the prime technical lead responsible for technology transfer to Lockheed Martin and Siemens Corporation for deployment by the US Postal Service, Australia Post, and UK Royal Mail. Govindaraju has been the principal or co-principal investigator of projects funded by government and industry for about 55 million dollars. The Center for Unified Biometrics and Sensors (CUBS) that he founded in 2003 has since received about 10 million dollars of research funding covering several projects in biometrics, security, document recognition, and retrieval.

Govindaraju has given over 100 invited talks and has supervised the dissertation of 20 doctoral students. He has served on the editorial boards of premier journals in his area, including the IEEE Transactions on Pattern Analysis and Machine Intelligence. He has co-chaired several technical conferences (AutoID 2005, BTAS 2007, ‘08) and workshops (CVPR 2007, ‘08, ‘09, DAS 2010). He has won several awards for his scholarship, including the prestigious MIT Global Technovator Award (2004) and the HP Open Innovation Award (2008, 09). He is a Fellow of the ACM, IEEE, and the International Association of Pattern Recognition (IAPR).