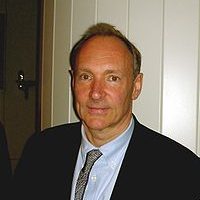 Timothy John “Tim” Berners-Lee (born 8 June 1955) is a British engineer and computer scientist and MIT professor credited with inventing the World Wide Web, making the first proposal for it in March 1989. On 25 December 1990, with the help of Robert Cailliau and a young student staff at CERN, he implemented the first successful communication between an HTTP client and server via the Internet.

In 1999, Time Magazine named Berners-Lee one of the 100 Most Important People of the 20th Century. In 2007, he was ranked Joint First, alongside Albert Hofmann, in The Telegraph’s list of 100 greatest living geniuses. Berners-Lee is the director of the World Wide Web Consortium (W3C), which oversees the Web’s continued development. He is also the founder of the World Wide Web Foundation, and is a senior researcher and holder of the 3Com Founders Chair at the MIT Computer Science and Artificial Intelligence Laboratory (CSAIL). He is a director of The Web Science Research Initiative (WSRI), and a member of the advisory board of the MIT Center for Collective Intelligence. In April 2009, he was elected as a member of the US National Academy of Sciences, based in Washington, DC.