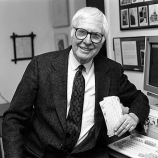 Stephen W. Dunwell led the engineering effort in the development of IBM’s STRETCH “supercomputer,” which was first shipped in 1962 — two years before the introduction of the legendary IBM System/360. The development of STRETCH illustrates the kind of engineering problem IBM has traditionally undertaken in advanced technology applications in large-scale computers. What made the STRETCH so complicated was that many more things than ever before had to go on simultaneously in one computer. As Dunwell later recalled: “For example, a high-speed disk file might be pouring information through a memory bus, a kind of interconnecting highway system, which must simultaneously carry information for the arithmetic unit. We needed the interconnection bus to handle data traffic to and from several memories and other parts of the machine. A device called a program look-ahead controlled this traffic system.” STRETCH’s story began in 1954. Discussions in the fall of that year attempted to identify systems problems suggested by computer design and user experience up to that time and to explore the applications of the rapidly developing transistor technology. At first, the planners concerned themselves with small computers but by early 1955, it was realized that the most useful application of the developments necessary to achieve the required translators, circuits, memory and packaging would be in a large rather than a small computer.