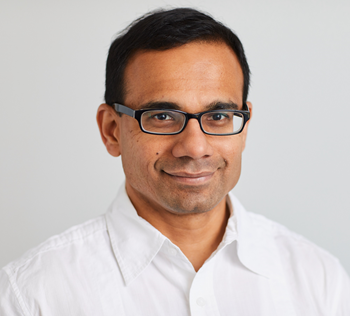 Salil Kanhere received the MS and PhD degrees from Drexel University, Philadelphia, USA. He is currently a Professor of Computer Science and Engineering with UNSW Sydney, Australia. His research interests include the Internet of Things, cyber-physical systems, blockchain, pervasive computing, cybersecurity, and applied machine learning. Salil is also affiliated with CISRO’s Data61 and the Cybersecurity Cooperative Research Centre. He is a recipient of the Friedrich Wilhelm Bessel Research Aware from the Alexander von Humboldt Foundation in 2020. He has authored over 250 peer-reviewed articles and delivered over 50 keynotes and technical tutorials. His research has been cited over 10,300 times and his h-index is 47 and regularly features in media including ABC NewsAustralia, Wired, ZDNet, Medium, MIT Technology Review and IEEE Spectrum. He has received 8 Best Paper, 2 Best Poster and 2 Best Demo awards. He is a Senior Member of the IEEE and ACM, a Humboldt Research Fellow, and an ACM Distinguished Speaker. He serves as the Editor in Chief of the Ad Hoc Networks Journal and as an Associate Editor of the IEEE Transactions On Network and Service Management, Computer Communications, and Pervasive and Mobile Computing. He has held visiting appointments at Institute of Infocom Research Singapore, Technical University Darmstadt Germany, University of Zurich Switzerland and the Graz University of Technology Austria. He has served on the organising committee of several IEEE/ACM international conferences including IEEE PerCom, IEEE/ACM CPS-IoT Week, IEEE WoWMoM, IEEE LCN, etc. and is the General Chair for the IEEE International Conference on Blockchain and Cryptocurrency (ICBC) 2021. He has co-authored a book titled Blockchain for Cyberphysical Systems published by Artech House in 2020.

In a cyber-physical system (CPS), computing elements coordinate and communicate with sensors, which monitor cyber and physical indicators, and actuators, which modify the cyber and physical environment where they are run. Current CPS ecosystems rely on centralised, brokered communication models, otherwise known as the client-server paradigm. All devices are identified, authenticated and connected through cloud servers and the data collected by the devices is stored in the cloud for further processing. While this model has connected generic computing devices for decades and will continue to support small-scale CPS networks as we see them today, it will not be able to respond to the growing needs of the large-scale CPS ecosystems of tomorrow with billions of connected devices. Cloud servers will remain a bottleneck and point of failure that can disrupt the entire network. This is especially important as critical services and infrastructure such as healthcare, electric grids, logistics, transportation become dependent on CPS. The current stove-piped architecture has also created isolated data silos, where users have limited control over their data and how it is used. Users have to trust the cloud and application providers and have no choice but to rely on their promises of security and availability.

In this talk, we will explore how Blockchain (BC) technology has the potential to overcome the aforementioned challenges. BC is an immutable timestamp ledger of blocks that is used for storing and sharing data in a distributed manner. The stored data might be payment history, e.g. Bitcoin, or a smart contract or even personal data. In recent years, BC has attracted tremendous attention from practitioners and academics in different disciplines (including law, finance, and computer science) due to its salient features which include decentralization, immutability, auditability and security and privacy. The talk will specifically consider three key aspects of CPS which include: (i) Internet of Things; (ii) Automotive Forensics; and (iii) Supply Chain. The talk will explain relevant concepts, review the state-of-the-art, present representative solutions and discuss open challenges.

Wireless devices are everywhere – our homes, offices, shops, restaurants and virtually all of our urban spaces. They invisibly fill the air with a spectrum of Radio Frequency (RF) signals. Any actions (e.g., gestures) undertaken by a human being creates perturbations in this ambient RF field. Analysis of the Channel State Information (CSI), which captures fine-grained details of the RF channel properties reveals a strong potential for recognizing these actions. In this talk, we will highlight two applications of passive WiFi sensing. In the first instance, we show that WiFi signals can be used to uniquely identify people. There is strong evidence that suggests that all humans have a unique gait. An individual’s gait will thus create unique perturbations in the WiFi spectrum. We propose a system called WiFi-ID that analyses the CSI to extract unique features that are representative of the walking style of that individual and thus allow us to uniquely identify that person. We implement WiFi-ID on commercial off-the-shelf devices and show that it can uniquely identify people with an average accuracy of 93% to 77% from a group of 2 to 6 people, respectively. We envisage that this technology can find many applications in a small office or smart home settings. In the second part of the talk, we present a two-factor authentication system called Wi-Auth, which utilizes WiFi signals for establishing the close proximity between a pre-registered secondary device and the primary device from which the login attempt is being made. We use this proximity as a second factor of authentication while requiring very limited interaction from the user. We implement Wi-Auth on commodity devices and demonstrate that it can achieve 94% authentication accuracy with 5% false positives and 6% false negatives. Moreover, Wi-Auth is robust in preventing co-located attacks with a 95% detection accuracy.

A Brain-Computer Interface (BCI) acquires brain signals, analyzes and translates them into commands that are relayed to actuation devices for carrying out desired actions. With the widespread connectivity of everyday devices realized by the advent of the Internet of Things (IoT), BCI can empower individuals to directly control objects such as smart home appliances or assistive robots, directly via their thoughts. However, the realization of this vision is faced with a number of challenges, most importantly being the issue of accurately interpreting the intent of the individual from the raw brain signals that are often of low fidelity and subject to noise. Moreover, pre-processing brain signals and the subsequent feature engineering are both time-consuming and highly reliant on human domain expertise. To address the aforementioned issues, in this paper, we propose a unified deep learning-based framework that enables effective human-thing cognitive interactivity in order to bridge individuals and IoT objects. We design a reinforcement learning-based Selective Attention Mechanism (SAM) to discover the distinctive features from the input brain signals. In addition, we propose a modified Long Short-Term Memory (LSTM) to distinguish the inter-dimensional information forwarded from the SAM. To evaluate the efficiency of the proposed framework, we conduct extensive real-world experiments and demonstrate that our model outperforms a number of competitive state-of-the-art baselines. Two practical real-time human-thing cognitive interaction applications are presented to validate the feasibility of our approach.