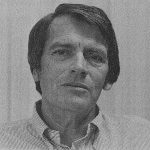 Robert S. Barton received his BA in 1948, and his MS in 1949, both in Mathematics, from the State University of Iowa. His early experience with digital computers came while working in the IBM Applied Science Department in 1951.

He joined the Shell Oil Company Technical Services, in 1954, where he worked on programming applications. It was then that most of his ideas on computer architecture and its interrelationship with programming had its origin.

He started managing a system programming group in 1959 which developed an ALGOL-like compiler for Burroughs, and in 1960, Bob turned to consulting.

For Beckman Instruments he worked on data collection from satellite systems. For Lockheed he consulted on satellite systems and the organization of data processing services. And for Burroughs he continued working on the design concepts of the B-5000.

After an assignment in Australia in 1963 managing a computer support group for Control Data Corporation, he returned in 1965 to join the Computer Science staff of the Department of Electrical Engineering at the University of Utah. At the same time he continued his consulting for General Electric, and later for Burroughs, where he worked on the architecture of the B-6700 and developed the concepts for using interpretive techniques in computer design, as employed in the B-1700.

Since 1973, he has devoted his full time to Burroughs Systems Research, working on new computer architectures and systems programming in La Jolla, California.

He is very interested in the social effects of technology and computers, has served as ACM Lecturer, and gave the Keynote address at the ACM National Meeting in San Diego in 1974.