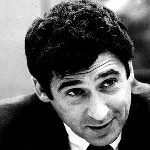 Ralph E. Gomory, IBM senior vice president for science and technology, heads an organization which consolidates the company’s Research Division (with laboratories in Yorktown Heights, N.Y., San Jose, Calif., Zurich, Switzerland, and Tokyo, Japan), and IBM’s science and technology assessment and university relations functions. He is also a member of the Corporate Management Board.

Dr. Gomory graduated from Williams College, studied at Cambridge University and received his Ph.D. in mathematics from Princeton University in 1954. He served in the U.S. Navy and was Higgins Lecturer in Mathematics at Princeton before joining IBM in 1959 as a research mathematician at Yorktown Heights. In 1964 he was made an IBM Fellow, a rank conferred on a small number of scientists and engineers in IBM. In 1970 he was named director of research, and in 1973 elected a vice president of IBM. He was named a member of the Corporate Management Board in 1983, elected a senior vice president of IBM in January 1985, and named to his current position in September 1986.

In 1987 Dr. Gomory became a member of the Council on Foreign Relations, chairman of Harvard University’s Visiting Committee for the Division of Applied Sciences, and chairman of the Advisory Committee to the President on High Temperature Superconductivity. This year, he also became a member of the University Council on the Graduate School of Yale University, the Carnegie Corporation of New York’s Commission on Science, Technology and Government, and the Advisory Council to Princeton University’s School of Engineering and Applied Science.

Dr. Gomory is a trustee of Princeton University and the Alfred P. Sloan Foundation, and has been a trustee of Hampshire College. He has been an Andrew White Professor-at-Large at Cornell University. He is a director of the Bank of New York, the Industrial Research Institute, and Nova Pharmaceutical Corporation.

In July 1988, Dr. Gomory received the National Medal of Science from President Reagan for his scientific contributions and “for bringing to a leading position one of industry’s most significant research establishments.” Previously, Dr. Gomory was awarded the Lanchester Prize of the Operations Research Society in 1964, the John von Neumann Theory Prize given jointly by the Operations Research Society and the Institute of Management Science in 1984, the Harry Goode Memorial Award given by the American Federation of Information Processing Societies in 1984, and the I.R.I Medal given by the Industrial Research Institute in 1985. In May 1988, he received the Institute of Electrical and Electronics Engineers (IEEE) Engineering Leadership Recognition Award.

Dr. Gomory is the author of over fifty technical papers.