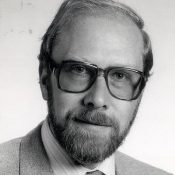 Niklaus Wirth was born in February 1934 in Winterthur, Switzerland. He received the degree of Electronics Engineering from the Swiss Federal Institute of Technology (ETH) in Zurich in 1959, an M.Sc. from Laval University, Canada, in 1960, and a Ph.D. from the University of California at Berkeley in 1963. He was Assistant Professor of Computer Science at Stanford University (1963–1967), and then at the University of Zurich. In 1968 he became Professor of Informatics at ETH Zurich. He spent two sabbatical years at the Xerox PARC in California, and he is retired since April 1999.