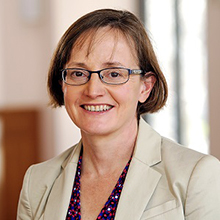 Margaret Martonosi is the Hugh Trumbull Adams ’35 Professor of Computer Science at Princeton University, where she has been on the faculty since 1994.  Since February, 2020, Martonosi is serving a term as the U. S. National Science Foundation’s Assistant Director for the Computer and Information Science and Engineering (CISE) Directorate.

Martonosi’s research interests are in computer architecture. Her work has included the development of the Wattch power modelling tool and the Princeton ZebraNet mobile sensor network project for the design and real-world deployment of zebra tracking collars in Kenya. Her current research focuses on hardware-software interface issues in both classical and quantum computing systems.  On the classical side, these include early-stage axiomatic verification approaches for memory consistency models in concurrent systems. In quantum computing, her research group explores full-stack toolflows for closing the resource gap between quantum algorithms and implementations. In addition to research papers, Martonosi is an inventor on several granted US patents, and has co-authored two technical reference books on power-aware computer architecture.  She completed her Ph.D. at Stanford University.

Martonosi is a member of the National Academy of Engineering and the American Academy of Arts and Sciences.  She is a Fellow of both IEEE and ACM. Other notable awards include the 2018 IEEE Computer Society Technical Achievement Award, the 2010 Princeton University Graduate Mentoring Award, the 2013 NCWIT Undergraduate Research Mentoring Award, the 2013 Anita Borg Institute Technical Leadership Award, and the 2015 Marie Pistilli Women in EDA Achievement Award.  Martonosi has also received ACM SIGARCH’s Alan D. Berenbaum Distinguished Service Award. In joint work with many others, the effort to co-found the ACM CARES movement was recognized by the Computing Research Association’s Distinguished Service Award.