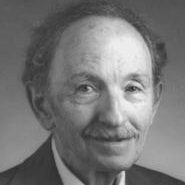 Irving John (Jack) Good was born 9 December 1916 in London, England. He was a Cryptologist, statistician, and early worker on Colossus at Bletchley Park and the University of Manchester Mark I. Major contributor, if not promulgator, of Bayesian Statistics.

Good rediscovered irrational numbers and the infinity of solutions of 2×2 = y2+1 at the age of 9. He rediscovered mathematical induction and, in a sense, integration, at the age of 13. In 1943, Good was one of seven people who helped design Mark II of a large-scale (classified) binary electronic digital computer called Colossus (which was not entirely general purpose).