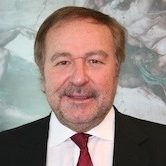 Ian F. Akiyildiz received his BS, MS, and PhD degrees in Computer Engineering from the University of Erlangen-Nuernberg, Germany, in 1978, 1981 and 1984, respectively. Currently, he is the Ken Byers Distinguished Chair Professor with the School of Electrical and Computer Engineering, Georgia Institute of Technology and Director of the Broadband Wireless Networking Laboratory.

In June 2008, Dr. Akyildiz becomes an honorary professor with the School of Electrical Engineering at Universitat Politècnica de Catalunya (UPC) in Barcelona, Spain. Also since March 2009, he is an honorary professor with the Department of Electrical, Electronic and Computer Engineering at the University of Pretoria, South Africa.

Dr. Akyildiz is an IEEE FELLOW (1996) with the citation: “For contributions to performance analysis of computer communication networks”.

He served as a National Lecturer for ACM from 1989 until 1998 and received the ACM Outstanding Distinguished Lecturer Award for 1994.

He also received the 2003 ACM SIGMOBILE Outstanding Contribution Award for his “pioneering contributions in the area of mobility and resource management for wireless communication networks”, September 2003.

Dr. Akyildiz received the 2004 Georgia Tech Faculty Research Author Award for his “outstanding record of publications of papers between 1999-2003”, April 2004.

Dr. Akyildiz is the author of an advanced textbook on “Wireless Sensor Networks” published by John Wiley and Sons in Fall 2009.

Dr. Akyildiz is the author of an advanced textbook on “Wireless Mesh Networks” published by John Wiley and Sons in February 2009.