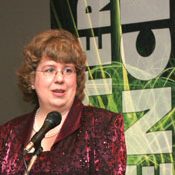 Pollock also received special recognition from the New Mexico legislature as a recipient of this award.

Pollock, a senior member of technical staff at Sandia National Laboratories in Albuquerque, was nominated for the award by the IEEE Albuquerque Section.She was one of eleven winners selected from among 88 nominees for this year’s YWCA award.In presenting the honor, YWCA officials stressed the importance of Pollock’s contributions to Sandia, her service to the computing profession, her efforts on behalf of nonprofit New Mexico organizations, and her participation in community activities, including her dedication to assisting the elderly.