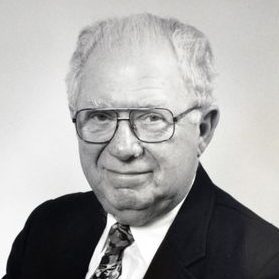 Dr. Gerald Estrin was born in New York and educated at the University of Wisconsin where he received the B.S, M.S. and Ph.D. degrees in 1948, 1949, and 1951, respectively. He served as research engineer in the von Neumann group at the Institute for Advanced Studies, Princeton, NJ from 1950–1956. In 1954–1955, he was Director of the Electronic Computer Project at the Weizmann Institute of Science in Israel where he led the development of WEIZAC, the first large-scale electronic computer outside of the United States or Western Europe. He is an IEEE Fellow, a Guggenheim Fellow, and a member of the Board of Governors of the Weizmann Institute of Science, Israel. He served as a Board member of Gould, Inc., Rolling Meadows, Illinois.

Dr. Estrin joined the UCLA Faculty in 1956 and in 1979 received University-wide recognition when the Regents approved his appointment as an Above Scale Professor. He served as Chairperson of the UCLA Computer Science Department from 1979–1982 and from 1985–1988. In 1991, Dr. Estrin retired and was recalled as Professor Emeritus. His current research interests are in creation of effective environments for collaborative design as well as advances in design methods and tools.