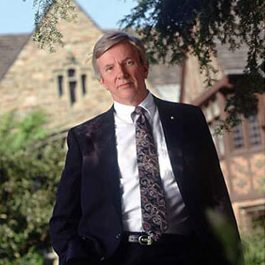 Prior to beginning his electrical engineering education, he served in the U. S. Air Force for four years as an instructor in radar control, receiving an honorable discharge in 1958. From 1961 to 1964 he was a Senior Computer Analyst and Group Leader with Amerad Corporation, Charlottesville, VA, responsible for the development of computer graphics system software. From 1964 to 1966 he was a Research Associate with the Research Laboratories for the Engineering Sciences, University of Virginia, where he worked on sampled-data models of silicon controlled rectifier systems. From 1966 to 1968 he held a NASA Traineeship and engaged in research in the pattern recognition area. He joined the faculty of the Department of Electrical Engineering, University of Virginia, in 1968. In 1978, he was appointed Chair of the Department and served in that capacity until the end of 1986. In January of 1987 he joined Vanderbilt University, Nashville, TN, as Centennial Professor of Electrical Engineering and Dean of the School of Engineering. He joined Worcester Polytechnic Institute in August of 1995 as President and Professor of Electrical and Computer Engineering, and was officially inaugurated in September 1996.

In the early 1970’s, Dr. Parrish’s seminal work in developing real time operating systems for microprocessor-based systems was distributed and used worldwide in both academia and industry. Dr. Parrish is best known for his research in pattern recognition and image processing. This led to his election as Fellow of the Institute of Electrical and Electronic Engineers (IEEE) in 1986. He has published and presented more than 100 papers in these areas.

Dr. Parrish is also a recognized authority on engineering education and has served in a variety of capacities within engineering accreditation. He has served on the Engineering Accreditation Commission of the Accreditation Board for Engineering and Technology, since 1989 and as a member of its Executive Committee since 1991; he is currently the immediate Past Chair of the EAC. He is responsible for chairing teams of experts who visit engineering schools to evaluate their programs for continued accreditation and for editing reports from other team chairs.

Dr. Parrish has held numerous positions at the national level of the IEEE. Most recently, he served as the 1988 President of the IEEE Computer Society, as a member of the Board of Directors of the IEEE (1990–1993), and as Vice President for Educational Activities and member of the Executive Committee (1992–1993). He served as editor-in-chief of Computer (1995–1998) and is a member of the magazine’s advisory board. He was also recently selected to represent the IEEE Computer Society in the International Federation for Information Processing, serving on the TC 3 Education Committee.

Dr. Parrish is a member of the honor societies Tau Beta Pi, Eta Kappa Nu, and Sigma Xi. He is listed in Who’s Who in Science and Engineering as well as many other such registries. He is a licensed Professional Engineer in the Commonwealth of Virginia and in the State of Tennessee.

His hobbies include music and woodworking.