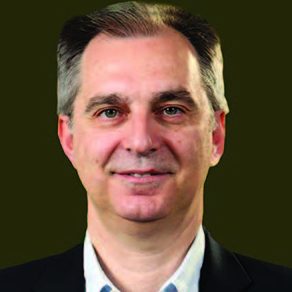 Dimitrios Serpanos is a professor of electrical and computer engineering at the University of Patras and director of the Industrial Systems Institute in Patras. He received a PhD in computer science from Princeton University. His research focuses on embedded and industrial control systems architecture and security.

He has served as president of the University of Western Greece (2010–2013) and director of the Industrial Systems Institute (2008–2013), which has become a significant research organization in embedded systems in Europe (member, ARTEMIS and ERCIM). He has been principal scientist at Qatar Computing Research Institute (2013–2016), research staff member at IBM (T.J. Watson, 1990–1996), and faculty at the Universities of Crete (1996–2000) and Patras (2000–present).

Serpanos is a founding member of the organizing committee of WESS (Workshop on Embedded Systems Security)/ESWEEK (2006–2015). He has served as general or TPC chair at several IEEE conferences, and as TPC member at more than 100 events. He is associate editor of IEEE TII, ACM TECS, and other journals.He has been published widely in journals and conferences and holds two US patents. He is an IEEE Senior Member, and a member of ACM, NYAS, and AAAS.

2018-2020 Board of Governors
Learn more about volunteering