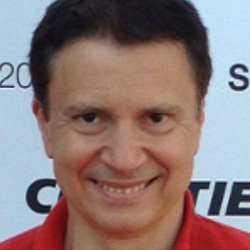 Demetri Terzopoulos is a Chancellor’s Professor of Computer Science at the University of California, Los Angeles, where he holds the rank of Distinguished Professor and directs the UCLA Computer Graphics & Vision Laboratory. He is Co-Founder and Chief Scientist of VoxelCloud, Inc., a multinational company that applies artificial intelligence to healthcare. He graduated from McGill University, received his PhD degree (’84) in Artificial Intelligence from the Massachusetts Institute of Technology (MIT), and remained a Research Scientist at the MIT Artificial Intelligence Laboratory through 1985.

Terzopoulos is or was a Guggenheim Fellow, a Fellow of the ACM, a Fellow of the IEEE, a Fellow of the Royal Society of London, a Fellow of the Royal Society of Canada, a member of the European Academy of Sciences and the New York Academy of Sciences, and a life member of Sigma Xi. His many awards include an Academy Award for Technical Achievement from the Academy of Motion Picture Arts and Sciences for his pioneering work on physics-based computer animation, and IEEE’s inaugural Computer Vision Distinguished Researcher Award for his pioneering and sustained research on deformable models and their applications. “Deformable models”, a term he coined, appears in the IEEE Taxonomy. He has received a Helmholtz Prize from the IEEE Computer Society, a Marr Prize citation, and over a dozen other best paper awards. The ISI and other indexes have listed him among the most highly-cited authors in engineering and computer science, with more than 400 published research papers and several volumes, primarily in computer graphics, computer vision, medical imaging, computer-aided design, and artificial intelligence/life. He has given more than 500 invited talks around the world about his research, including well over 100 distinguished lectures and keynote/plenary addresses.