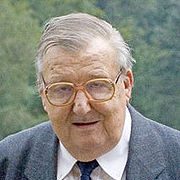 Carl Adam Petri (12 July 1926 – 2 July 2010) was a German mathematician and computer scientist. He was born in Leipzig. Petri nets were invented in August 1939 by Carl Adam Petri – at the age of 13 – for the purpose of describing chemical processes. He documented the Petri net in 1962 as part of his dissertation, Kommunikation mit Automaten (communication with automata). He worked from 1959 to 1962 at University of Bonn and received his PhD degree in 1962 from the Darmstadt University of Technology. It significantly advanced the fields of parallel computing and distributed computing, and it helped define the modern studies of complex systems and workflow management. His contributions have been in the broader area of network theory which includes coordination models and theories of interaction, and eventually led to the formal study of software connectors.

In 1988 he became honorary professor of the University of Hamburg. Petri officially retired in 1991. He is member of the Academia Europea.

In 2007 Professor Carl Adam Petri was honored for his lifetime achievements by the “Academy of Transdisciplinary Learning and Advanced Studies (ATLAS)” with a “Academy Gold Medal of Honor”.