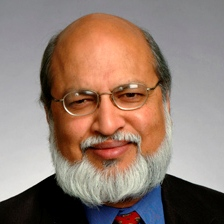 Arvind is the Johnson Professor of Computer Science and Engineering at the Massachusetts Institute of Technology. He received his M.S. and Ph.D. in Computer Science from the University of Minnesota in 1972 and 1973, respectively, and his B. Tech. in Electrical Engineering from the Indian Institute of Technology, Kanpur, in 1969.  Prior to coming to MIT, Arvind taught at the University of California, Irvine, from 1974 to 1978, and at IIT Kanpur from 1977 to 1978.

In 1992, Arvind’s group, in collaboration with Motorola, completed the Monsoon dataflow machine and its associated software. A dozen of these machines were built and installed at Los Alamos National Labs and other universities, before Monsoon was retired to the Computer Museum in California.

In 2000, Arvind started Sandburst, a fabless semiconductor company to produce a chip set for 10G-bit Ethernet routers. He served as its President until his return to MIT in September 2002. Sandburst was acquired by Broadcom in 2006. In 2003, Arvind co-founded Bluespec Inc, an EDA company to produce a set of tools for high-level synthesis, and serves on its board.

Arvind’s current research focus is on enabling rapid development of embedded systems using Guarded Atomic Actions. He continues to be interested in Memory Models and Cache Coherence Protocols for parallel architectures and languages.

Arvind is a Fellow of IEEE and ACM, and a member of the National Academy of Engineering.