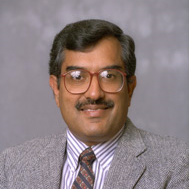 Arif Ghafoor is a Professor of Electrical and Computer Engineering at Purdue University and is the coordinator of Distributed Multimedia Systems Laboratory. Ghafoor leads several research projects related to design and development of distributed multimedia systems, multimedia data modeling, and broadband multimedia communication. His research involves both theoretical and experimental studies in these areas. Most recently, he has also been investigating security issues for database management systems.

He is a Fellow of the IEEE. He received 1993 Advisor Excellence Award by the Purdue Student Government.